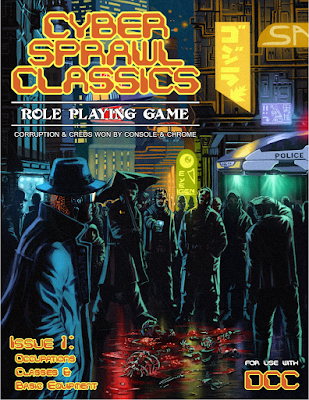 Cyber Sprawl Classics is "Corruption & Creds Won by Console & Chrome": a cyberpunk version of Dungeon Crawl Classics that harkens back to the late 80s to the mid 90s. As the other puts it:

"There is a certain aesthetic that comes to mind when I think about cyberpunk. It is not a place of sleek design and Apple minimalism, but flickering LCDs and spraypaint. It has no glitz. No glamour. It is dystopian wreckage to it’s core, riddled with addicts high on second-life wetware, hackers plugging data-cables in their body’s cyberware, Runners disemboweling corporate security on rooftops and in between them all: a high-tech, low-life world colored in overcast grays and neon lights."

Access to The Umerican Survival Guide and Mutant Crawl Classics are specifically called out by the author as being useful. I would suggest that Nowhere City Nights may also supply worthwhile inspiration, especially if you wish "to run the fantasy-cyberpunk mashup of Shadowrun".

Introduction: Already quoted from liberally above, the Introduction is standard fare, explaining where the author is coming from and what he's trying to achieve.

Notable is this paragraph:

"Lastly, credit where credit is due: All of this art was found and reappropriated (stolen) from browsing the internet; Many from the old Shadowrun modules of the early 90’s. I’ve done my best to include artist credit. Mechanically, the Street Samurai and Infiltrator are the DCC Warrior and Thief, nearly verbatim, while the Medic is a reworked version of the Healer from Mutant Crawl Classics. The Firearms tables were largely from Crawl! Issue #8 and the Umerican Survival Guide."

What’s New: Training & Armor: Characters in Cyber Sprawl Classics learn to use weapons randomly, rather than by class. The exception is the Street Samurai, who is trained in all weaponry.

Armor is based on general type (Light, Medium, Heavy, or Shield) rather than specific types.

0-Level Occupations: This is a 1d30 table that provides only human characters, in keeping with the general theme of the cyberpunk genre. Your character could be a Musician (Punk), a Scientist, or a Programmer. This table is useful for any sort of "modern characters enter the fantasy world" version of Dungeon Crawl Classics, in addition to its obvious use here.

Luck Augur: Birth Augurs in Cyber Sprawl Classics do not have clever titles. No one is born under the sign of Crossed Computers.

Etiquette: This is knowing how to fit into certain types of society, including understanding the slang and expectations of a group. The types are: Academic, Corporate, Gang, Security, Runner, Socialite, and Street. Street is used by Information Brokers, the Homeless, and Bartenders, as opposed to Gang, which is used by Gang Members.

You're a Runner: a rigger, an infiltator, a street samurai, a cool-headed hacker executing programs in the metaverse. You seek corruption and creds, winning it with console and chrome, bathed in the blood and filth of the oppresive, the megacorps, the police, and the artificial. There are payloads to be won deep in the Sprawl, and you shall have them.

Return to the glory days of cyberpunk with Cyber Sprawl Classics. Adventure as 1984 intended you to.