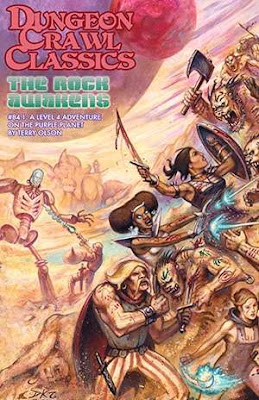 DCC #84.1: The Rock Awakens is a level 4 adventure written by Terry Olson with art by Doug Kovacs (cover), Brad McDevitt, and Stefan Poag. Cartography is by Mark Allen. The publisher is Goodman Games.

This is the first of several supplimental adventures supporting Peril on the Purple Planet. As with the Barsoom stories of Edgar Rice Burroughs, each additional "tale" adds new elements to the complexity of the Purple Planet without undoing what has gone before.

This is not a very long adventure - 16 digest-sized pages plus covers, covering eight encounter areas - but it is a good one, and it is one that could easily be run in a four-hour convention slot.

Because the adventure is short, I am going to avoid any spoilers. Terry Olson does talk about it on Spellburn, in this podcast, for those who want a bit more.