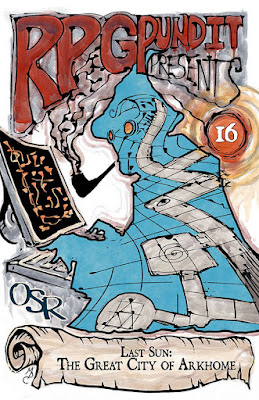 RPGPundit Presents #16: The Great City of Arkhome was written by RPGPundit, with artwork by Michael Clarke, kreatiw, Rorius, and imagepluss. The publisher is Precis Intermedia.

Adding to this confusion, the Great City of Arkhome is explicitly part of RPGPundit's Dungeon Crawl Classics campaign, to which he refers as "the crown jewel of my Last Sun setting". The relationship to DCC is obvious (for instance, "the Frog-Daemon Bobgobdabulz the Unspellable, who dreams of obtaining the magical power necessary to transform the whole canyon into an enormous swamp"), but the product itself is essentially system-neutral.

Within you will find a brief discussion of the Factions of Arkhome, as well as generators to determine the contents of various towers, based upon which levels you are in, and the events that might occur there.

"An entire level dedicated to the breeding, milking, and slaughtering of giant snails can be found here. This provides the bulk of lower-class food supplies for the city. Some of these farms occupy two levels of a tower. The single largest snail farm is in one of the towers controlled by the Snake Witch (it is four levels in size)."

Examples of events include:

"Students at a magical academy are dying under mysterious circumstances. The headmaster is a low-level wizard desperate to find the cause. A chaos-creature summoned by one of the hapless students may be responsible."

"The Thieves Guild has put out a reward for the live capture of one of their former members—One-Eyed Jack. He has skimmed a fortune from their earnings and is currently in hiding, trying to buy his way out of the city by subtle means."

"A mostly abandoned level has had an outbreak of zombie-ism among local beggars, who are now threatening to move into a more-populated residential shantytown."

Although this was obviously written with Dungeon Crawl Classics in mind, I would have marked in "honorary", except that it links directly to RPGPundit Presents #20: The Great City of Arkhome 2, which has an occupations table for Arkhome.

From the annals of the RPGPundit's (in)famous Last Sun gonzo fantasy campaign, this supplement focuses on one of the last known cities that still has a majority of human inhabitants. Surrounded by an immense desert region, Arkhome is littered with enormous towers that are linked to each other through bridges. The Assassin King, Snake Witch, Old Families, and various gangs vie for power. Random level and event tables are also included.