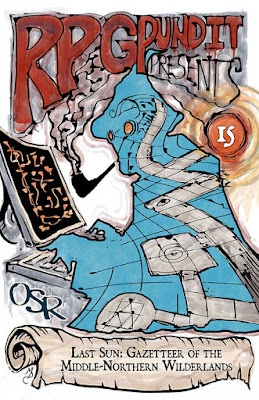 RPGPundit Presents Volume 15: Last Sun: Gazetteer of the   Middle-Northern Wilderlands was written by RPGPundit, with artwork by Michael Clarke, Microstocker1, imagepluss, ddraw, and filkusto. The publisher is Precis Intermedia.

Because not all of the RPGPundit Presents series are compatible with Dungeon Crawl Classics, and none of them are printed under the compatibility license, I shall do my best to list them when I believe they are designed for use with DCC. Others are more generic, or designed to be used for other games (in particular  Lion & Dragon). In this particular case, there is at least a blog post describing this product as being specifically related to the author's DCC campaign.

Despite the name, you will find neither a map of the Middle-Northern Wilderness, nor any long description of the same. There is a five-paragraph outline of the region, but that hardly qualifies as a gazetteer in my books.

What you will find is a 0-level profession table for the region, which allows for the creation of Dwarven Mole-Ranchers, Elven Human-Advocates, Halfling Stranglers. and Human Torchbearers. In many ways, the humans get the short end of the stick as far as interesting occupations go.

There are also notes on professions, in case you don't know what an Elven Blogger's recording device does, or need stats for a Halfling Chicken Rider's mount. Given that this also describes items like the blaster gun and the jetpack, it may be useful to judges running games in the Umerica of Crawling Under a Broken Moon, or mined for ideas usable in Mutant Crawl Classics.

From the annals of the RPGPundit's (in)famous Last Sun gonzo fantasy campaign, this supplement focuses on the Middle-Northern Wilderlands. This is home to tiny groups of human survivors that were devastated by a zombie outbreak, the Rose Dome populated with Hipster Elves (see issue 4), cannibal halflings, and more. Also included is a table of 75 0-level professions for Dwarf, Hipster Elf, Human Survivor, and Feral Halfling characters.