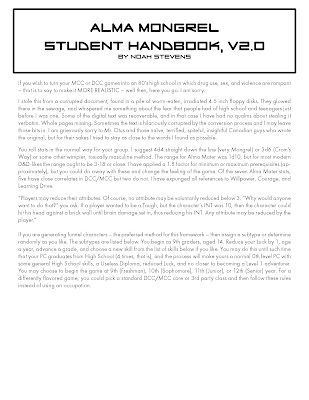 What is this? The author writes:

If you wish to turn your MCC or DCC games into an 80’s high school in which drug use, sex, and violence are rampant – that is to say to make it MORE REALISTIC – well then, here you go. I am sorry.

I stole this from a corrupted document, found in a pile of worm-eaten, irradiated 4.5 inch floppy disks. They glowed there in the sewage, and whispered me something about the fear that people had of high school and teenagers just before I was one. Some of the digital text was recoverable, and in that case I have had no qualms about stealing it verbatim. Whole pages missing. Sometimes the text is hilariously corrupted by the conversion process and I may leave those bits in. I am grievously sorry to Mr. Otus and those naïve, terrified, spiteful, insightful Canadian guys who wrote the original, but for their sakes I tried to stay as close to the words I found as possible.

Herein you will find information to determine the Social Levels of your hapless high school PCs, their Student Subtypes (Cheerleader, Brain, Criminal, etc.), their Problems (because everyone has problems, especially in high school), and their Skills (Crudeness, Smuggling, Studying, and so on).

Rules are given for those important Tests and Quizzes as well as Reaction Rolls to allow for the "long-term developments of ongoing relationships and animosities, as well as friendships and even sexual relationships" which would be a focus of play.

Throw in some monsters and adventures, and you can have a game reminiscent of Todd and the Book of Pure Evil or early seasons of Buffy the Vampire Slayer.

If you are running a more standard Dungeon Crawl Classics or Mutant Crawl Classics campaign, it would be easy to envision a series of adventures that draws the PCs into the mortal shells of high school kids, where they have to deal with some problem from that vantage point before resuming their own lives. When they return to the same haunted high school, it quickly becomes apparent that their actions from the previous adventure have had consequences, for good or ill, on those that they inhabited.

Making it a series of adventures grants the players the opportunity to become aware that their social gaffes will, sooner or later, also affect them. In this adventure or another. Dead in the teen body might mean dead in their regular lives. Socially dead might have consequences as well!