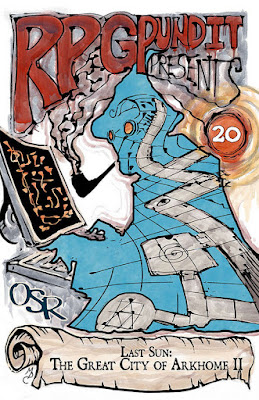 RPGPundit Presents #20: The Great City of Arkhome 2 was written by RPGPundit, with artwork by Michael Clarke, Steve Robertson, Samiramay, Pavelmidi, kuco, and Songool. The publisher is Precis Intermedia.

This product specifically relates to RPGPundit Presents #16: The Great City of Arkhome, adding more details and an Arkhome 0-level Occupations table. More random events and encounters are supplied, and more information is presented about various aspects and personalities of Arkhome. For example:

"The Evil Parrot was created by a chaotic wizard long ago, as a kind of familiar. He granted it an extraordinary intelligence in order to act as spy and assassin. The Evil Parrot was too evil, however, as it murdered its own master. It has since proceeded to enact a reign of terror, without anyone even suspecting it."

No game statistics are supplied, so you will have to invent your own.

From the annals of the RPGPundit's (in)famous Last Sun gonzo fantasy campaign, this supplement focuses on one of the last known cities that still has a majority of human inhabitants. Expands on issue #16 with a random 0-level occupation table, 3 random event/encounter tables (surface, canyon cave, and sub-surface), and more.