Grimtooth's Tomb of the Warhammer 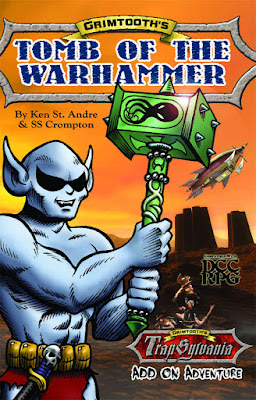 Grimtooth's Tomb of the Warhammer is a 4th level adventure by Ken St. Andre and Steven S. Crompton, with Dungeon Crawl Classics statistics by Terry Olson. It was illustrated by S.S. Crompton. The publisher is Goodman Games, under license from Flying Buffalo, Inc.

If you want to know a little more about Grimtooth and Trapsylvania, read here or Steven Crompton's blog post here. The second link also discusses Tomb of the Warhammer.

As with Grimtooth's Museum of Death, this adventure is not for the faint of heart. The tone also matches that of the Flying Buffalo Grimstooth products, not surprisingly as Steven Crompton has been there since the beginning. There is no small bit of silliness at the heart of the blood-soaked events, which may seem off-kilter in an ongoing campaign milieu. In this adventure, the PCs enter the Tomb of Grimfang, Grimtooth's father. It is a killer dungeon. The authors are upfront about that. "The Judge should be relentless in his attempts to slay the party, but don't do it too easily."

I would find it hard to use this adventure as written in an ongoing campaign. As a one-shot, a dream sequence, or an alternate plane of existence/planet, though, who knows? As part of Grimtooth's Trapsylvania, where the players know to fear to tread...well, everywhere? Probably.

Can you go where no troll dares to tread? Long ago, the elves killed Grimtooth’s father in a great battle. They hid the troll leader’s body and his mystic warhammer somewhere in the vast plains beyond Trapsylvania. After years of searching, Grimtooth has finally located his father’s tomb, but the elves have magically rigged it so that no troll can enter. Now Grimtooth is looking for a party of foolhardy adventurers to enter Grimfang’s Tomb and return with the legendary warhammer…