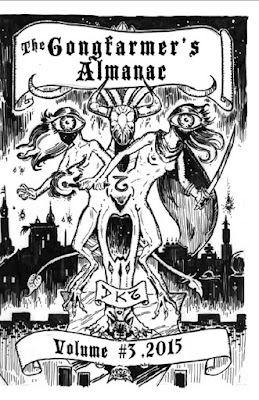 The 2016 Gongfarmer’s Almanac: Volume 3: Monsters & Treasure is a Dungeon Crawl Classics RPG Zine written, illustrated, and produced by the DCC RPG G+ community under the creative vision and direction of Doug Kovacs, Harley Stroh, Jon Hershberger, Marc Bruner, Matt Hildebrand, and Michael Jones, under the rubric of the Gongfarmer's Local #282.

Disclosure: I am credited as an editor, and I have writing in this volume.

This table of contents for this volume is divided into two sections: one for Monsters and the other for Treasure, but the contents don't necessarily appear in that order. Let's look inside!

The Giant’s Gullet Roll Your Own Encounter: This is a "Choose-your-own-adventure" style offering from Clint Bohaty, that sees the reader, after a convention-game TPK, encounter the DCC world of adventure for his or her own self. The adventure is spread throughout the volume in several parts, with the order jumbled to prevent a simple read-through.

Arrows of Anra: On the "Treasure" side of things, James A. Pozenel, Jr. offers "an open-ended collection of unique, magical arrows". Specifically, this is a Dungeon Crawl Classics take on the original Arrow of Slaying.

Two Roaches for Your Adventures: Author Daniel Bishop (being myself) offers two fun cockroach creatures for your PCs to encounter. The ironroach swarm is a swarm of metal-eating cockroaches, and carproaches (normal, swarms, and giant) are an "unpleasant admixture of insect and fish". Carproaches will also make an appearance in Curse of Mistwood.

Gazette-Fear: The Goodman Games Gazette featured a "Creature in the Corner" with art by Doug Kovacs. Author bygrinstow gives these creatures statistics and a full write-up. Several are individual beings, rather than races of creatures, which is entirely in keeping with the flavor of both Dungeon Crawl Classics and Appendix N fiction.

Included are a cursed assassin, a tenacious and irrational species of humanoid that collects man-made objects in their sea caves, an ex-wizard that is slowly turning into a beast, tigerflies from the Faerie realm, and a big-mouthed alien who wanders the Purple Planet as the last of his kind. The free pdfs include some of Doug Kovacs' artwork in color, and are therefore worth obtaining even if you already have the print version.

The Cowwitch: A truly nasty surprise by author Robert Runyon, this is a one-time sorceress cursed into the form of a cow, whose charming milk can create a "lactopathic bond" with her victims. On the surface, this is udder nonsense, but when you let it roll around in your head for a little bit, you know that you are going to use it!

Ring of Gelatinous Form: Jumping back to "Treasure", Stephen Murrish (edited by James Pozenel) offers a rather gloppy magic item that your wizard might wish he never decided to try on.

Thieving Hand of Glamox: Michael Bolam writes: "Inspired by the Lifthrasir’s ring in DCC 85: Making of the Ghost Ring, I created this artifact when the party’s thief lost his hand to a exploding trap. The adventures related to the hand have been quite popular, particularly the interactions with the Zenshire, the Halfling Mafia of Cave-In-Rock, a village located not far from the the party’s homebase. Preparing for the worst, the party soon discovered the Zenshire to be a shadow of their former power. It was just a bunch of graying halflings, some of them missing a hand, who were much more interested in a good sandwich and a smoke than any sort of organized crime. I renamed the village of Thorum (from Crawl! 4) to Cave-in-Rock and placed the Hand of Glamox in the nearby dungeon, but obviously, the artifact can be placed anywhere in your campaign world."

The Wandering Eye: Another item written by Stephen Murrish and edited by James Pozenel, "Wandering Eyes are wondrous items created by the Patron Ronco, mysterious Lord of Inventions." Somehow I cannot help but think of Mad-Eye Moody.

Minor Magic Items: Mike Markey offers two items of enchantment. The Goblet of Seeing
was inspired by Jacques Belasis’s Scopus, from “Jonathan Strange & Mr Norrell”, by Susanna Clarke. It reminded me of The Soldier and Death from Jim Henson's The Storyteller. The Candle of Finding was inspired by “Shiver in the Pines”, by Manly Wade Wellman, and therefore belongs in any Shudder Mountains campaign.