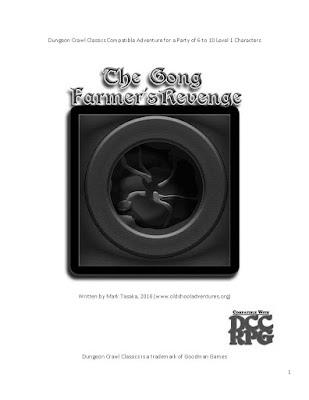 The Gong Farmer's Revenge, by Mark Tasaka (writing and cartography), is a Dungeon Crawl Classics adventure for 6-10 level 1 characters. It is published by Old School Adventures.

The Gong Farmer's Revenge is an interesting work, but one that the aspiring judge will want to go through carefully before running. The area around the village of Greenleaf, for instance, may seem too dangerous to be believable for many judges, but the encounters provided need not all be run as part of this adventure. I quite like the encounter with the ravens and the giant spider, which has a fairy tale feel to it which would fit well with a milieu in which includes Bride of the Darkened Rider and/or Creeping Beauties of the Wood.

I also rather liked that the author considered three possible outcomes for the adventure, dependng upon the choices of the players and their characters' success at bringing those choices to fruition. It is unfortunate that the author is far enough removed from a medieval agrarian existence that he didn't understand the potential importance of gong farming both to supply fertilizer and, later, to supply niter (saltpeter) for the manufacture of gunpowder and explosives. Our gong farmer, taken back for trial, could not only claim that he was protecting the livelihood of himself and his kith, but potentially that of Greenleaf's farming community!

If you roll up a gongfarmer as your starting occupation, you gain a bag of night soil as your trade goods. Human waste was called "night soil" because, in Tudor England, there were strict laws about when it could be collected due to the stench. A cruel judge, or one who merely cares about verisimilitude, can add an element of the overpowering odor of human waste to the dwelling of the vengeful gong farmer of the adventure's title.

"Oscar" and her kind may be the most interesting element in the adventure, perhaps because they are not fleshed out. Regardless of how your group handles the gong farmer, if any of Oscar's children managed to survive, hidden away in the connected latrine-pits of Greenleaf, they may arise one day to avenge their slain mother. Perhaps that was  always their plan. Or perhaps they just want to eat night soil in the "comfort" of their own outhouses.

There are also some language issues you'll want to be aware of: I recommend reading the read-aloud text aloud before running this adventure, and then either paraphrasing or editing the text to match the natural cadence of your normal speech. Watch out for assumptions about what the PCs are doing as well.

Please note that this is a free adventure, and the author went out of his way to include things like an Appendix offering a full character sheet for an NPC who may accompany the PCs. None of the foregoing is meant to dissuade you from this product which, if a bit whimisical or rough-around-the-edges in places, will still offer you a solid session or two of gaming, a few new monsters for your campaign milieu, and (with Kobolds Stole My Cat) an example of how adventures may be linked together.

The free pdf is no longer available.
Posted by ravencrowking at 11:15