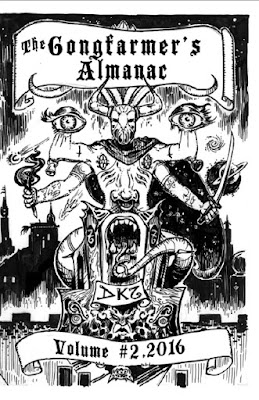 The 2016 Gongfarmer’s Almanac: Volume 2: Patrons & Gods is a Dungeon Crawl Classics RPG Zine written, illustrated, and produced by the DCC RPG G+ community under the creative vision and direction of Doug Kovacs, Harley Stroh, Jon Hershberger, Marc Bruner, Matt Hildebrand, and Michael Jones, under the rubric of the Gongfarmer's Local #282.

Cire - Interdimensional Patron: Written up by Eric Hoffman, this is a one-time client wizard of Urhatta who is now master of several pocket dimensions created by Dead Gods.The patron write-up is complete except for a 3rd level patron spell.

Patsy, Patron God of Henchfolk: If you have ever seen Monty Python and the Holy Grail, you will know instantly where author Duncan McPhedran got the inspiration from for this patron. The only thing that this full patron write-up is missing is the means for your poor abused henchmen to invoke him...and any judge worthy of that title can deal with that!

Sisssnagagarrasssh: If you have played through The Portal Under the Stars, you should be familiar with a certain immortal demon-snake that appears therein. Author James A. Pozenel, Jr., offers a "Petty Patron" (as per Paul Wolfe on Mystic Bull Games blog, which became demi-patrons in the expanded version of Angels, Daemons, & Beings Between, following the usage in Silent Nightfall). The author notes:


At a number of points in this text I’ve alluded to increasing Sisssnagagarrasssh’s powers. What I’ve presented here is a patron that is ready to be developed up by you, the judge, and your players. Portal Under the Stars is a terrific adventure that has several strong plot hooks to expand upon. The goal of this work is to give you a head start on what happens after Portal Under the Stars. More invoke patron results need to be added and patron spells need to be created as Sisssnagagarrasssh’s power increases. I wanted to flesh out the snake horn and its creator, but at the same time I didn’t want to provide you with a full-blown DCC Core Book patron.

Paul Wolfe’s work on patrons has heavily informed me during the creation of this patron. He has given the DCC community an interesting look at how to develop patrons with differing power levels. How your players and you level up Sisssnagagarrasssh or any other patron is ultimately up to you.

The Children of Ibyk: Speaking of mystic bulls, David Powers offers the write-up of Ibyk, bull-headed Lord of the Black Sun, god of war, wealth, dancing, and lasciviousness, who has now fallen into a low state. Invoke patron results, patron taint, and a 1st level patron spell are provided.

Torvak, the Enslaved Ape-God: Jeff Call provides patron information for Torvak, the colossal four-armed ape god of the subterranean Apeman city of Voodos. No patron spells are provided. I can easily imagine an epic high-level adventure where the enslaved ape-god breaks free!

Crom!!!: Few fantasy deities are as well-known or as well-beloved as Crom, who Conan the Barbarian swears by. Now Ian Wyckoff gives you clerical information for Crom, the StarSmasher, including a unique disapproval table.

I Fought the Law (& the Law Won): Making Law in DCC as Badass as Chaos: Steve Bean provides an "Unabashed (if not Unapologetic) Editorial" to convince you that Law is as worthy an alignment as Chaos.

No one ever has too many patrons, and with the price being set at "free", what are you waiting for?