Tales of the Smoking Wyrm #1 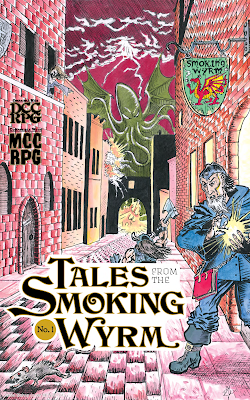 Disclosure: I backed the successful Kickstarter for this issue. I am also a backer of Issue #2.

The first thing you'll notice about this zine is that it is erudite. The creators discuss their sources as well as the history of the hobby. If that sort of thing excites you, then you will certainly enjoy this. I am in that target audience, so, while the writing is crisp, I can't be 100% sure how someone else will read this.

The Paladin: This is a good example of what I mean. The article starts:

"Paladins have a longstanding position in the Old School Revival (OSR). From their origins in Supplement I—Greyhawk (1975) as a subclass of Fighting Man to their firm position in every edition since Advanced Dungeons & Dragons First Edition, the paladin is a mainstay of the genre. Historically, the term paladin originates from the French Chanson de geste (song of heroic deeds) cycle as names for the twelve foremost knights of Charlemagne’s court. Appendix N includes Poul Anderson’s Three Hearts and Three Lions, which is itself inspired by the Chanson de geste."

If you love this sort of stuff the way I do, then you will enjoy the zine. They even go so far as to remind you of the paladin in Crawl! fanzine #6 and the Paladin of Gambrinus in The Gong farmers Almanac 2017 volume 6. Because I like to include these sort of links in the Trove write-ups, it is wonderful to have that part already done for me!

This is a bit different, and is actually fully in line with the "Quest For It" ethos of Dungeon Crawl Classics. Instead of creating a new class, the author writes, "any class can devote themselves to the tenants of their faith, under the guidance of a cleric of that god. This begins with the new third level cleric spell investiture, wherein the would-be paladins carry out a quest for their god, overseen by the cleric." That is gold, to me - the idea of prestige classes from 3rd Edition carried to their logical conclusion and done right.

Cthulhu: A complete patron write-up for H.P. Lovecraft's most famous creation, including invoke patron results, Spellburn and Patron Taint tables, and three unique patron spells: Summons of the Deep, Breath of the Deep, and Form of the Deep. There are also suggestions for adding three books to your Appendix N reading list because they contain some details about Cthulhu which H.P. Lovecraft left out.

For more on Cthulhu, see the Goodman Games Gen Con 2017 Program Book, Crawl-thulhu, In the Prison of the Squid Sorcerer, Shadow Under Devil's Reef, Sanctum Secorum Episode #09 Companion: Two From H.P. Lovecraft, The Perplexing Disappearances in Brambury, The Portsmouth Mermaid, and Three Nights in Portsmouth.

Culpepper's Herbal: A fantasy version of Nicholas Culpeper's famous work (which I have on one of my bookshelves!). This installment describes adder's false tongue and aconite (or yellow wolf's bane). Included is a general description, where to find it, when it flowers, how it relates to astrology, and the potential bodily virtues of the plant (with full rules to use the plant in your game).

The Silver Ball: "Many an adventurer has run afoul of the mysterious Silver Ball, often when they least expect it. Appearing out of darkened shadows, or even mid-air, the Silver Ball does not speak, or make any sound at all. Rather it glides in silently, absorbing the adventurer into its inner volume, and then just as rapidly disappearing."

Tables are included to determine what happens when (if) the Silver Ball ejects you.

Telepathic Rat: Lots of Mutant Crawl Classics characters end up with one, but what exactly can it do? As part of the Kickstarter, Blind Visionary Publications also sent me a Telepathic Rat bookmark, which can act as a character sheet for your pet. For another take on the telepathic rat, see Check This Artifact.

Rites & Rituals Part I: “The DCC rules present spells in resplendent detail. Just prior to the spell section, there is a small passage on Ritualized magic. Here, The Dark Master clearly states that while spells presented therein can be extended in various ways (see DCC, pp.124-126), that the august tome the spells reside in do not include the “great rites and rituals of the era.” This article sketches out how rites and rituals differ from normal spells, and outlines how to present them.”

Included are the Rites of Schlag-Ruthe, which creates the means to dowse for magical power sources, and Dark Phylactery, which allows the caster to set aside parts of their soul “to ward against the death of their body”.

What is the Smoking Wyrm?: In short, it is a zine that tries to follow in the footsteps of Alarums and Excursions, The Dungeoneer, Troll Crusher, Underworld Oracle, and their ilk.

Greetings morsels! Welcome to the Smoking Wyrm! Inside you will find your greatest delights and most excellent treasures! We cater to the most rarified of tastes! Most compelling of all are the stories people share while they drink deeply of our fine ales and wines. Who is here now, you ask? To the left, a rather muculent entourage yearning to share with you all extant (and some extinct!) knowledge of their fine patron who dwells deep in the sea’s abyssal depths!