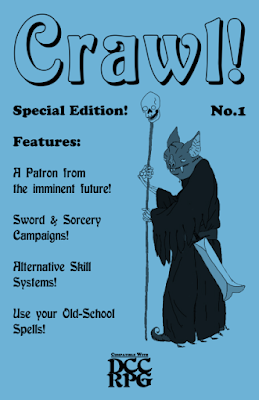 The original Dungeon Crawl Classics zine, Crawl! fanzine sprang into existence in 2013, not long after the game itself saw the light of day. The first issue was written by Reverend Dak and Brett Miller. Crawl! is published Straycouches Press.

This article discusses ways to make DCC seem more like the "Pulp Fantasy and Swords & Sorcery Campaigns" of Appendix N fiction. Everyone is human, there is no cleric, and all the PCs have some thief skills.

What if your patron was an aspect of yourself from one potential future? This is the first third-party patron published for the Dungeon Crawl Classics game.

A variation on the bleeding out rules in the core rulebook.

Dungeon Crawl Classics has pretty simple rules for skill checks. This is an equally simple way to make the DCs for those checks a little more random that 5/10/15/20. The "Class Skill Die" is a good idea, which follows pretty intuitively from the concept of Deed Dice and Luck Dice for thieves.

Imagine that you are in the early days of Dungeon Crawl Classics, and there aren't as many DCC adventures out there as there are now. What do you do? Use older adventures, of course! What do you do about the spells in those adventures? Rev Dak has you covered!

I personally use non-DCC adventures all the time, including things like Death Frost Doom for Lamentations of the Flame Princess and Barrowmaze, Stonehell, and Anomalous Subsurface Environment for Labyrinth Lord. This article was of tremendous help in the early days of doing so.

Finally, when you buy the first issue of Crawl!, you now gain the complete Van Den Danderclanden as a separate pdf booklet.
Posted by ravencrowking at 14:57