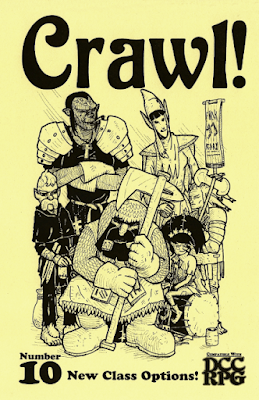 Disclaimer: I have an article in this issue.

Within it we find:

You will remember how Crawl! fanzine #6 offered you some new classes? Well, Jeffrey Tadlock offers you an alternative to the race-as-class system Dungeon Crawl Classics uses for demi-humans. Your dwarf gongfarmer might survive to become a full-fledged Dwarf. Or she might become a Dwarven Priest.

Similarly, your elf might become an Elven Rogue instead of just an Elf. Reverend Dak J. Ultimak supplies a new class.

...is followed by an alternative Halfling class, also by Rev. Dak J. Ultimak.

Now, I actually have some problems with these classes. They seem to give extras to PCs at very little, or no, cost. If a Dwarven Priest is almost always superior to a Dwarf, why play a Dwarf? Likewise the Elven Rogue, and especially the Halfling Burglar. If you feel that the original classes are underpowered, this isn't going to be a problem for you. If you thought the original classes were relatively well balanced, you might be having flashbacks to AD&D 1st Edition, where the multiclassed demi-humans were obviously superior to your human fighter. Unlike AD&D, though, there is no XP penalty to even things out.

This article is an optional multi-classing system which I created to answer the same problems that the three classes above sought (at least in part) to address: At some point, players ask why their halfling cannot become a thief. Or why their warrior cannot also become a cleric.

The article, which was originally written with Crawl! fanzine #6 in mind, includes information for all the base classes, plus those introduced in that issue.

The basic idea is to introduce some cost in exchange for flexibility.

Not Just A Pretty Face

A series of charts to randomly determine physical traits, such as height, weight, and hair color, by Colin Chapman. This is useful not only for PCs, but to remind the Judge that NPCs should not all look the same.

The final article is a "spotlight on three of many 3rd-Party races" compiled by Noah Stevens. A basic description is given of the Transylvanian Adventures Half Breed by Scott Mathis, the Avarian of the Hubris campaign setting by WrathOfZombies, and the Faerie Animal by Daniel Bishop, from Creeping Beauties of the Wood. Yes, that last one is mine.
Posted by ravencrowking at 12:53