Crawling Under a Broken Moon #2 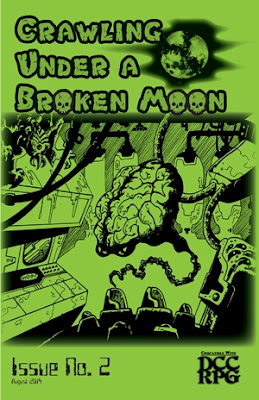 Crawling Under a Broken Moon #2 is written By Reid San Filippo and published by Shield of Faith Studios. This issue contains:

It is going to be almost impossible to look back at this issue, after Mutant Crawl Classics releases, and not compare the two versions of mutants. I have nothing but respect for the Umerica version, though, and I imagine that either type of mutant will be welcome in my own games. The "Mutant Origin" table is a nice touch!

Naturally, now that you have rules for mutants, you will want to mutate some monsters. And, naturally, the Mutant class from the previous article makes it easy. Example creatures are the Falcon Wolf and the Mighty Tarasqu-Ape.

Rules for all types of grenades, including bundles of dynamite, Molotov cocktails, and MicroNukes. Have fun!

This issue introduces the Zombie Monks of the Cyberhive, the Robo-Lich, and the Mutitan. The first two are some of the best post-Apololyptic monsters yet released for Dungeon Crawl Classics, being nothing that would exist without either high technology or magic. With their interest in harvesting the dead, PCs might actually deal with them in some other way than just combat. I have used these critters in a game using Patrick Wetmore's Anomalous Subsurface Environment (originally designed for Labyrinth Lord), and the players were rather freaked out.

Mutitans are "writhing masses of flesh with multiple limbs, torsos, heads, mouths, tentacles, and eyes. New appendages burst forth as older ones sink back into the flesh or are sloughed off."

This issue describes the Floating Tower of the Cyberhive, which might seem like an interesting setting for an adventure...but it is one most adventurers would flee from! You might as well admit it: sooner or later, we all wonder what it would be like if a Borg Cube merged with The Tomb of the Cybermen on an episode of Thundarr the Barbarian!
Posted by ravencrowking at 16:58