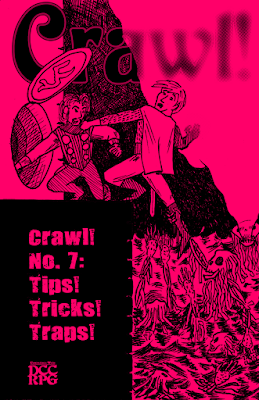 Within this issue we find:

Advice on using mazes by Kirin Robinson: "The actual playing of being lost in a maze is pretty difficult to make not boring. It’s a challenge of finding the right balance between wanting to foster a sense of growing frustration and dread against the potentially annoying or even boring repetition of escape denial."

Thom Hall provides rules founded in the (open) source code for Nethack, allowing for fountains ala Rougelike computer adventure games. Now they can appear in your pen-and-paper tabletop games.

Sean Ellis, who already turned his eye towards kobolds in Crawl! #3, and goblinoids in Crawl! #5, gives some ideas for making ogres more interesting.

Some traps make attack rolls against the PCs. And sometimes those attack rolls are natural "20"s. Jeffrey Tadlock provides some sample traps, and a critical hit table for traps of all types.

"The Shadowsword was forged from the shadow of the demon Ith-Narmant, who resides on a world circling a black sun where only ghosts, demonspawn and creatures of the night can prosper." Jürgen Mayer provides a Dungeon Crawl Classics magic sword your players will not soon forget. This is a good example of what a magical DCC blade should look like.

My Gongfarmer Can’t Do Sh*t