Crawling Under a Broken Moon #4 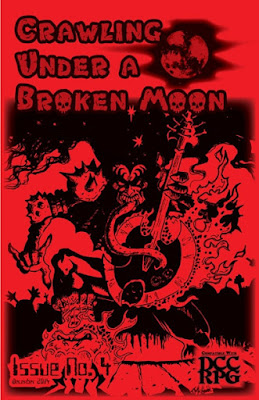 Crawling Under a Broken Moon #4 is written by Reid San Filippo, Sean Ellis and Ryan Moore. It is published by Shield of Faith Studios. This issue focuses on some of the patrons one might deal with in Umerica. It contains complete patron information for:

* The Earth Brain of the Cyberhive,

* The Mighty Kizz, intergalactic God of Rock and Roll (by Reid San Filippo and Sean Ellis), and

* Theszolokomodram the Thousand-Headed Hydra, the Unknowable Serpent Sage, the Observer of Realms, and the Many-Headed Master of Secrets.

In addition, we find:

Ryan Moore introduces us to the Solar Saber, a techno-magical weapon created during "the dark times between the breaking of the world and the current age". It also has an invoke patron table and patron taint. This weapon is clearly inspired by the awesome 80's action of Thundarr the Barbarian.

The Rockers are heavy metal elementals that are devoted servants of Kizz. Beware the unintentional injuries their mosh pit shenanigans may cause!

All in all, you get more than three fully developed patrons in this issue, which is a pretty good bargain. This issue definitely builds off of what has come before, by defining Kizz, the Cyberhive, and Theszolokomodram, all of which are mentioned or described in earlier issues.
Posted by ravencrowking at 12:08