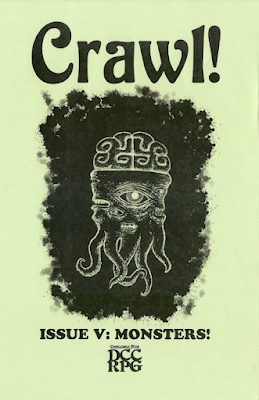 Disclaimer: I produced a piece of art for this issue. Apart from that slight blemish, the art in this issue (produced by Mitchell Hudson, Jason Adams, Count Spatula, Tomi Baranya, and John Becaro) is outstanding.

In this issue we have:

Modify your monsters by giving them class levels, similar to those enjoyed by the PCs. This article, by Reverend Dak, offers judges who care about those sorts of things an easy way to create versions of classed monsters whose class abilities roughly parallel those of the PCs. The math involved is easier than, say, Pathfinder, but I prefer to simply make those decisions on the basis of what feels right. If you want more guidance, this article is for you.

Shane Clements offers a Dungeon Crawl Classics orc class that appears to be based of the 3rd-edition era Dungeons & Dragons orc (although the illustration is pure 1st Edition AD&D!). This class would be easily adaptable to any sort of barbaric humanoid...including human berserkers (if you ditch the infravision).

Originally published at People Them With Monsters, Jeremy Deram offers a quick "cheat sheet" for creating your own monster stats. Again, this article can help give the prospective judge some guidance.

This article, by Jeff Rients, is exactly what it says on the tin. The charts are provided for up to five dungeon levels, effectively ranking the monsters in the Cyclopedia of Creatures roughly by power level.

Two original monsters by Brad Littman, one of which is clearly inspired by Jim Henson's Labyrinth, and the other by the moving stones of Death Valley in California.

Colin Chapman offers the blood hound and the gloom hound.

The nicest thing about the monsters offered by Brad and Colin are that, to me at least, it is immediately possible to see how they could be used in an adventure or a campaign milieu.
Posted by ravencrowking at 04:59