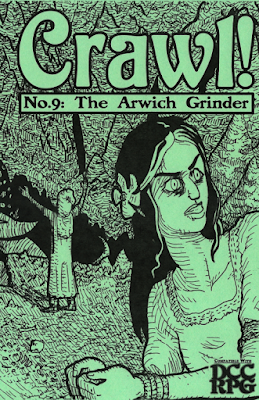 Crawl! fanzine #9 is The Arwich Grinder, which I wrote, published by Straycouches Press. Sean Poppe turned my original maps into something suitably creepy, and Mario T. matched the tone of the adventure with truly disturbing artwork.

This is the darkest thing that I have ever written. When I finished the text, I had to get up and shake it off.

The adventure is largely inspired by the works of H.P. Lovecraft, in particular The Case of Charles Dexter Ward, The Rats in the Walls, The Dunwich Horror, and The Picture in the House. I think I managed to create enough of the necessary horror - an actual pulling back from the ideas presented - to offer at least a dim echo of the Master's work here. I tried to create a sense of cosmic horror as well, though perhaps less successfully.

This is, after all, a 0-level funnel in which it is abundantly clear that your PCs hold no special place in the universe. This might cause some to carve out their own importance, but in my experience, many players simply have their PCs slink away in the night, unwilling to face Arwich village with the shared horror of what they have done.

On a brighter note, when I first ran this adventure in 2014 for my then-fifteen-year-old daughter and one of her friends, reports came back to me that I was "cool" because they told others about the adventure.

I have considered writing "The Reverse Grinder", in which the PCs slaughter an innocent family because they imagine that they are in a Lovecraft-inspired funnel. My sense of humor is appalling.

The Curwen Family have lived up among the pine woods on the outskirts of Arwich Village for as long as the oldest village gaffers can remember. The beautiful Bessie Curwen’s bonnet is found in a strange creature’s grasp. The village owes much to her family, so someone must go up into the dark pine-clad hills to make sure that the Curwens are all right. After all, the Curwens saved the village from starvation two winters ago. If you do not go, who will?

What in the name of heaven or hell could be happening up there?

Also included, But He Sure Had Guts!, a gruesome short encounter that I originally wrote targeting Crawl! fanzine #5 (The Monster Issue). There is another short encounter I wrote and submitted at the time, The Urchin Gambit, which has yet to appear in Crawl!

Buy It Here!
Posted by ravencrowking at 06:42