Crepuscular #1: Sanctum of the Snail 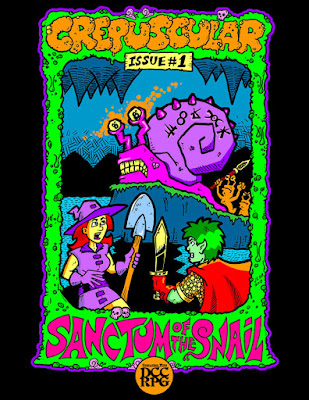 Crepuscular #1: Sanctum of the Snail was written  and illustrated by Joshua LH Burnett. The publisher is JLHB Polytechnic.

This zine focuses on events near and within Xöthma-Ghül, the Crepuscular City. The cover is fantastic, reminding one of a psychedelic black light poster that wouldn't look out of place in the 1970s.

Sanctum of the Snail: This is a 0-level funnel adventure designed to put the "fun" back in funnel. Not that Dungeon Crawl Classics funnels are not fun, but there is a sense of silly gonzo-ness to this adventure that is reminiscent of The Wizardarium of Calabraxis. If you know me, you know that this is high praise. While the encounters and the artwork suggest that a grain of salt be taken by everyone involved, the tone of the writing is actually serious, which hits just the right note.

It was a fairly pleasant trip until the storm hit. Your ship sank, and now you and the other survivors--peasants, pilgrims, and gongfarmers--are stuck on this jagged spire in the middle of the ocean. The storm rages all around you while monsters crawl out of the sea. It looks like the only way off this rock is down through that weird door. Who will live and who will die in this 0-level funnel adventure?

Blorgamorg, the Chthonic Snail: "The Chthonic Snail patiently crawls through the hidden places below the earth, always chewing, always listening, always feeding on the secret wisdom of the world. Blorgamorg is a patient and wise entity, who eschews the petty conflicts of law and chaos. He prizes knowledge for the sake of knowledge. Lore sustains him. All secrets are known to him. Blorgamorg values servants who show tenacity, fortitude, and foresight. Rash and hasty minions displease him. Blorgamorg bitterly hates Bobububilz, and followers of the Chthonic Snail must always guard against the machinations of the Demon Lord of Amphibians."

A full patron write-up is provided.

Items of Interest: "Magical items to tempt or torment your crawlers." Included are two items:

Vagabond District: Thirty NPCs which might be used as hirelings or henchmen, not all of whom are 0-level schmucks. Some of them are very unusual, such as "Quvark, humanoid platypus" and "Xander-372, syntheric man".