Greenwood of the Fey Sovereign 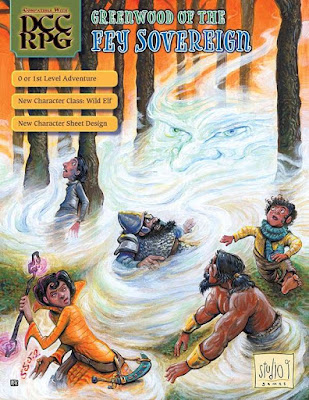 Greenwood of the Fey Sovereign is a 0-level funnel adventure written and illustrated by C. Aaron Kreader. The publisher is Studio 9 Games.

Disclosure: I have an editing credit on this product.

This fey-themed funnel adventure, which hit the virtual shelves one day after Fae Hard, was the result of a successful Kickstarter campaign. While both are funnel adventures, and both are fey-themed, their take on this is very different. While both adventures begin with the hapless 0-level PCs pressed into service, the nature of that service is utterly different, as is how escaping servitude is resolved. From that point on, the biggest similarity - apart from the fey theme - is that the PCs are caught in the midst of a conflict they would probably rather avoid.

In essence, the set-up for this adventure serves to move characters into the otherworldly Greenwood, which is a subset of Elfland, and there to ensure that enough conflict exists to motivate players and whittle down the starting characters. The author has taken a general view of the fey that I approve of. To whit:

"The creatures of Greenwood are not easily identified—what man calls elf is actually a vast collective of diverse and distinct creatures including (but not limited to) pixies, brownies, goblins, demons, wild elves, and devils. There is no common elf here. To rubes, the crea-tures within may be mistaken for tiny men, thin green women, or even elves, but are of no known race. Resist telling players the name of what they are seeing—describe entities in terms they would know. If asked, “Is it an elf?” convey ambiguity. Elf characters will know that fey woodlands contain creatures more ancient and mysterious than themselves, and often these creatures appear not as they really are."

The Earl's pressgang, and the inclusion of Pertrub to goad the PCs into action, allows the judge to engage in a bit of fun. Pertrub would fit well as a foil to Cugel the Clever, excepting that the PCs are likely to make a more permanent end to him than Cugel tends to do. I recommend grabbing the Vancian Word List from the Sanctum Secorum Episode #21 Companion: The Dying Earth and really going to town with this character.

Parts of the adventure are more linear than I would like. While this does seem to be common for funnel adventures, I don't think it was strictly necessary here. A matrix of potential encounters in the Greenwood, depending upon the choices of the players, possibly with some random element to underscore the nature of the otherworldly woodland. This isn't entirely necessary, though, and is really no different from the invisible bridge in Hole in the Sky - it gets the PCs to the location(s) where the real action will take place.

In addition to the adventure, this products includes a new character class - the wild elf, or wildling. These elves are vulnerable to any metal, and use weapons made of wood, stone, and the like. They gain some thief abilities, and some limited spellcasting.

War is looming. The Earl of Nanch and his neighboring elven kingdom are sharpening the spears of aggression. Those on the border are split between two dangerous dynasts. Pressed into duty for lord and country, the peasants and gong farmers of Nanch find themselves in a strange and unnerving forest full of denizens older than the practice of naming. In this new world, the rules of life and death are a game of whimsy practiced by fantastic forces, and bizarre ancient feuds re-ignite in the chaos of war. Those errant attendants of Nanch will be fortunate to survive the madness of either ruler!