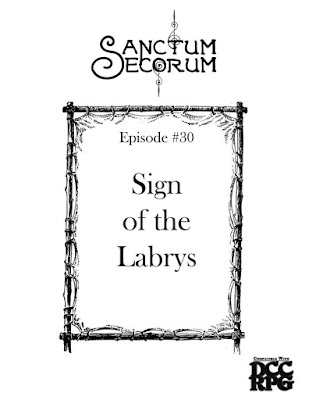 This Episode Companion is based on Sanctum Secorum Episode 30: Sign of the Labrys, which discussed the novel by Margaret St. Clair. The featured adventure was Operation Unfathomable by Jason Sholtis (DCC conversion by Paul Wolfe).

Disclosure: I did some writing for this Episode Companion.

Occult Actions: "There are times when those who wield arcane magic wish to draw directly upon their connection to the raw phlogiston of the universe for impromptu effects rather than for use in greater magic. Doing so requires advanced understanding of magical energies and this is not something practiced by mere apprentices."

Author Bob Brinkman offers a mechanic, similar to a Deed Die, to do one of the following:


Yeast Plagues: In Sign of the Labrys, the vast majority of humanity has been wiped out by plagues of (possibly intentionally) mutated yeast. Author Daniel J. Bishop provides mechanics for the pulmonary and neutolytic yeast plagues described in the novel.

Interlude: The Vault of Future Past: This adventure, by Ari-Matti Piippo, is for any level. It is intended to take place during wilderness travel. The author writes "It contains no combat or pronounced risk of death, although skilled players will certainly be able to kill off a few characters in the plasticrete bowels of the Vault."

The basic conceit of the adventure is that "most of the fantasy worlds we adventure in are
simply post-apocalyptic locales, where the inhabitants have forgotten their vaunted technological past, and consigned its wonders to the realm of magic and superstition. Why else would the wilderness be full of deep tunnel complexes and wandering hybrid monstrosities?"

This is certainly the case in Mutant Crawl Classics, Umerica, or adventure areas such as Silent Nightfall.

The Blood-Drinking Box, Part 6: Clifford Morton continues the tale started in Sanctum Secorum Episode #25 Companion: The Fallible Fiend. This is based of off Terry Olson's Elzemon and the Blood Drinking Box.

Cryo-Fungus: An extremely cold and prolific fungus, brought to you by Marc Bruner.