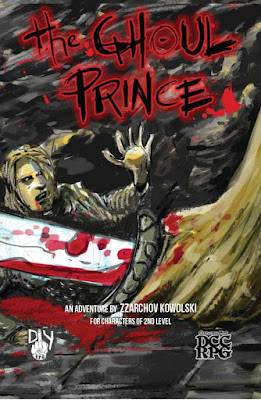 The Ghoul Prince is a 2nd level adventure by Zzarchov Kowolski. Art is by Alex Mayo (including cover). Cartography is by Dyson Logos. The publisher is DIY RPG Productions.

Disclosure: I have been offered a print copy of this product for free in exchange for this listing. I paid for the pdf version, and I would have made this listing anyway.

"So this adventure is starting with a weird question I’ve been playing around with: how easy can you make it to slot a published adventure into the wildly different campaign settings of actual tables, without destroying all the flavour and actual value of that adventure as a useful tool."

"The idea is that there is a central frame of an adventure with a lot of set dressing that is used to cement it into a setting. The frame of the adventure is unchanging, while the set dressing is specifically labelled with an accompanying index so the GM can reference
notes with what is on the page.

These are not just cosmetic changes, and they do impact the play of the game."

This is an interesting framing device, but it takes space to convey. Examples of using this adventure location as a barrow, a desert tomb, and an alpine mausoleum are provided. There is space to create your own frame using these as examples. To make better use of the adventure, consider using the alternative frames when devising other sites of your own. By using bits and pieces of a given frame across several adventures, you can get full value for those you do not include as part of your version of The Ghoul Prince proper.

The Ghoul Prince himself is a great adversary, and is given appropriate (but easy to use) mechanics to promote his role in the adventure. The judge will may have to create stats for some creatures, although the author took this into consideration and offers the judge easy ways to avoid it.  Still, I prefer full statblocks be included for all creatures, and there lack herein is the only serious failing I see with the adventure as written. On the other hand, this does make the adventure easier to adjust for other level parties.

Overall, monsters and setting elements are good and flavorful, but if the judge doesn't do her prep work, she may find herself flipping pages - a lot! - during actual play. The pdf is password-protected, but content copying is allowed, so it would be possible to cut & paste the details you need into a single document, and then print it before game time. I would recommend this. I would also take the time to copy statblocks you might need from the core rulebook so that you don't need to look them up at the table.

By introducing some holograms and medical-superscience, this would also work well as a Mutant Crawl Classics adventure. The framing set-up would allow it to work with Crawljammer, Umerica, Transylvanian Adventures, or any other setting you might wish. It would even work well in something like Nowhere City Nights or the Brimstone of Black Powder, Black Magic.

The adventure also includes a full patron write-up for the Bone Lady: "a powerful demon that takes the form of an old crone. She haunts the wilderness around the tomb (in a regional sense) and appears only at night. When encountered or summoned, she will be next to a magically appearing crater filled with bones that she stirs and tends with a long pole. Anyone who peers into the pit to see its contents must make a DC 12 Will Save or be driven to dig out their own skeleton and add it to the pit, becoming frantically obsessed with doing so."

This patron does not grant unique spells, but offers ones which already appear in the core rules.