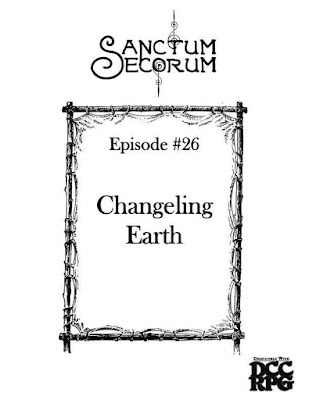 The Sanctum Secorum Episode #26 Companion: Changeling Earth was written by Bob Brinkman, Jen Brinkman, Marc Bruner, and Clifford Morton. Art is by Artsed, Henry Pether, Holy Lof, and NASA/JPL-Caltech. The publisher is Sanctum Media. This product is produced in association with the Sanctum Secorum podcast.

This Episode Companion is based on Sanctum Secorum Episode 26: Changeling Earth, which discussed the novel by Fred Saberhagen. The featured adventure was Silent Nightfall by Daniel J. Bishop.

The Changeling Earth (aka Ardneh's World) is the third volume of the Empire of the East series.

Disclosure: I wrote the featured adventure for this episode.

Elemental Turning: "A wizard can attempt to wrest control of an elemental from another wizard, seeking to turn it against its master, diminish its strength, or even banish it from this plane of existence." Marc Bruner supplies the rules you will need to include this element in your game.

The Blood-Drinking Box. Part 2: Clifford Morton continues the tale from Sanctum Secorum Episode #25 Companion: The Fallible Fiend. This is based of off Terry Olson's Elzemon and the Blood Drinking Box.

Orcus: This is a deity write-up by Bob Brinkman, and it is not the Orcus known to Dungeons & Dragons players for decades. "Of all of the demons of the Empire of the East, it is Orcus who reigns supreme. All other demons and living beings are but ash blown before his radioactive might. Chained and sleeping within the abyss, Orcus awaits the day he should be awakened by the foolhardy. Disdainful of both the living, as well as his own kind, should Orcus be unbound it will attempt to lay waste to the world before it."

Essentially, this version of Orcus is a demon created by the influx of magic at the time a nuclear missile detonated. The origin of the demon in Silent Nightfall is an homage to the concept from this novel.

Demon Mount (Type II demon): "The demon mount is a chimera-like demonic steed summoned by powerful wizards to traverse great distances at an extremely high rate of speed." These mounts are not all the same, and author Marc Bruner provides a d10 table to determine each mount's head, torso, and form of locomotion.

Elemental, Desert: "Desert elementals are close kin to air elementals and share many of the same traits. However, desert elementals are not merely warm, living zephyrs, they are the howling manifestations of the deserts heat coupled with unrestrained winds." This entry, by Bob Brinkman, follows the standard DCC method of elementals having 8, 12, or 16 Hit Dice.

Elemental, Forest: "The gentle force of life given form, the forest elemental is normally the most gentle and peaceful of all their summoned kin. Unwilling to enter combat unless strongly provoked by actions of a greatly destructive nature or forced self preservation, the forest elemental is greatly sought after for its skill in aiding passage through woodlands." This elemental write-up is also by Bob Brinkman, using the standard DCC method for elemental Hit Dice.

Door of Orcus: This is a 5th level wizard spell by Jen Brinkman. "This high-powered spell creates a doorway through which the powerful Demon-Emperor Orcus may return to the mortal plane."

Summon Elemental: This is a 3rd level wizard spell by Marc Bruner. "This spell allows powerful wizards to summon the primal elements from the roiling elemental planes of fire, earth, water, and air, reconstituting the same elements to do the caster’s bidding in the form of elementals."