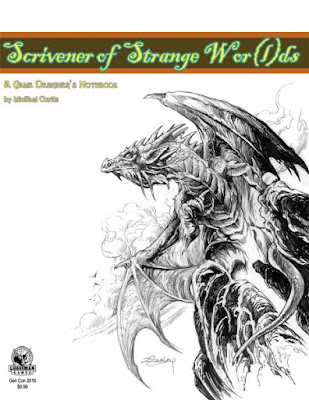 Scrivener of Strange Wor(l)ds: A Game Designer's Notebook was written by Michael Curtis. Art is by Jeff Easley (cover), Doug Kovacs, and Stefan Poag. The publisher is Goodman Games.

In 2016, Goodman Games published three volumes of what were essentially working notebooks of two of their writers and a working sketchbook from one of their artists. These were The Devil's Chapbook, The Drain Chamber, and Scrivener of Strange Wor(l)ds. As with the previous entries, I am going to focus on material related to Dungeon Crawl Classics. In this case, that is nearly the entirety of the work!

Foreword: By Joseph Goodman. What it says on the tin.

The Horrible Happenings in Huddle: A DCC adventure suitable for 0-level to 2nd level characters. "Life thrives out in the cold hell of space: horrific, utterly alien life that is inscrutable to the minds that dwell on the worlds below. And unfortunately for those who live under thos unforgiving skies, sometimes that life comes calling..."

This is a short adventure, from the early days of DCC, before the core rulebook had been published. Although it could be expanded upon by the judge (there is an "Additional Ideas" section) it is relatively complete in three pages. Michael  Curtis writes "although I knew where I wanted to go with it, I couldn't write a clear path there and other projects started demanding my attention." I, for one, would like to see a fuller treatment one day.

If you are looking for more H.P. Lovecraft-inspired content for your game, this adventure is an homage to The Color Out of Space.

A Night on the Town: Oolvanvar Street Events: A city-based homage to The Warriors, this was a free-form sandbox adventure the author ran at conventions "for a couple of years." These are six encounters Michael Curtis wrote out in case he needed some help in his improv. It might be fun to use this in conjunction with Street Kids of Ur-Hadad.

The Dark Labyrinth: An Old School Dungeon Level: Three rooms from a shared megadungeon project which never materialized. Although the material appears to be written for TSR-era Dungeons & Dragons (or a simulacra thereof), the judge could easily convert these rooms for use in a dungeon crawl of her own.

The Ol' Swimmin' Hole: A DCC adventure for any level, originally intended for Tales from the Shudder Mountains Volume 2. Michael Curtis writes: "I plunged into the Swimmin' Hole a few times, but I never could find the bottom of it and solid rock to stand on." Which means that the adventure didn't reach the point where he was happy with it, as far as I can tell, not that the discerning judge couldn't use this material (in whole or in part) in a Shudder Mountains campaign. It should be noted that there is a link with DCC #83.2: Death Among the Pines.

Intrigue at the Court of Chaos Alternate Encounters: Some ideas that were considered for the vault containing the Yokeless Egg in Intrigue at the Court of Chaos. There is an author's note where Michael Curtis says that "when I don't feel like writing out the whole stat block from scratch" he will simply cut and paste from another manuscript, and then revise. I do exactly the same thing!

The Turtle Dungeon Adventure Pitch: Michael Curtis' pitch to Joseph Goodman for the adventure that became The Sea Queen Escapes!

These last two items are useful for prospective authors. Comparing the pitch or the original text to what was eventually published reminds us both that no idea need be set in stone, and that sometimes veering from that original idea is a mistake.

After Words: An afterword, with an image of two pages of Michael Curtis' commonplace book, showing "a list of unusual and/or cool words" he discovered.

Writers are desperate and dangerous souls, seldom allowed out in pleasant company. Best left alone in their garrets and fed a steady diet of red meat and whiskey, these madmen and women create horrible works of written art, works they unleash on the unwitting public! Only the brave efforts of editors and publishers can keep these maniacs restrained.

But every once and awhile, those gatekeepers of public safety slip up and the raw scribblings of writers escape into the wild, stalking their prey without mercy. This book is once such breakout, a collection of the works of Michael Curtis, game designer and fiend. Inside you’ll find writings too dangerous ever before to be published: alternate versions of his popular adventures, abandoned scenarios deemed too dangerous to behold, and photographic evidence likely to be displayed in a court of justice some day! Are you brave enough to visit this mental madhouse and emerge unscathed? We dare you to come inside…