Hive of the Overmind 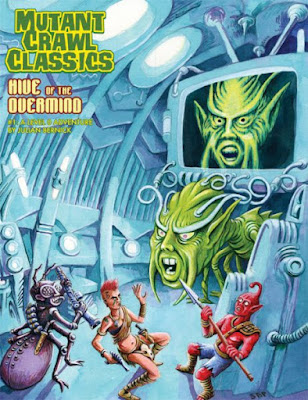 MCC #1: Hive of the Overmind is a 0 level Mutant Crawl Classics funnel adventure written by Julian Bernick. Art is by Stefan Poag (including cover and cartography), Chris Arneson, Tom Galambos, and Cliff Kurowski. The publisher is Goodman Games.

Younglings on their Rite of Passage are shocked to regain consciousness with no memory of how they came to be in a gigantic insect hive far to the north of their homelands, laboring as drone-slaves of the savage ant-men. In a land where an “insect revolution” has taken place, the PCs must contend with insectoid mega fauna and a maze-like underground installation before facing the ominous Overmind: a building-sized insect queen cybernetically linked to an ancient chaotic AI.
Posted by ravencrowking at 11:14