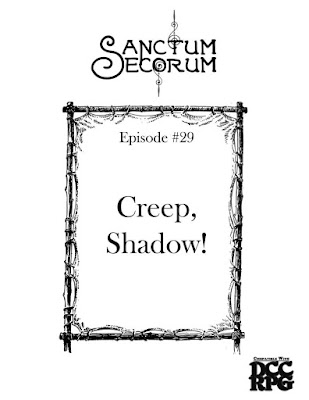 This Episode Companion is based on Sanctum Secorum Episode 29: Creep, Shadow!, which discussed the novel by Abraham Merritt. The featured adventure was Bride of the Black Manse
by Harley Stroh.

Creep, Shadow! was a sequel to Burn, Witch, Burn!, which was discussed on the Appendix N Bookclub podcast here.

Disclosure: Four adventures I wrote (The Arwich Grinder, Creeping Beauties of the Wood, The Imperishable Sorceress, and The Portsmouth Mermaid) were discussed in this episode.

Shadows, Followers, and Whisperers: "Sometimes the darkness has a will and a voice. And sometimes the shadows want things beyond the simple suffering of mortal men." Author Ari-Matti Piippo goes to town on the shadows presented in this novel, supplying everything you need to include similar beings/events in your home campaign.

Really, I cannot say too much about the job done here. In addition to general shadow mechanics, the author delves into specific shadow interactions. To wit:

Two curses inspired by Creep, Shadow! are given game mechanics by Bob Brinkman. While it is unlikely that the PCs themselves will fall victim to these curses, because of the specifics of how they are cast, these can be used exactly as were their literary counterparts - as motivation when used against other characters in the milieu, and/or as a threat of their use against the protagonists.

Curse of the Captive Reflection: Although it can only be used under very specific circumstances, those who fall prey to this curse become "subject to every capricious whim of the witch who has them enthralled, so long as the witch holds the mirror on their person."

Curse of the Mason’s Knot: A killing curse that requires the victim's shadow to be measured.

The Blood-Drinking Box, Part 5: Clifford Morton continues the tale started in Sanctum Secorum Episode #25 Companion: The Fallible Fiend. This is based of off Terry Olson's Elzemon and the Blood Drinking Box.