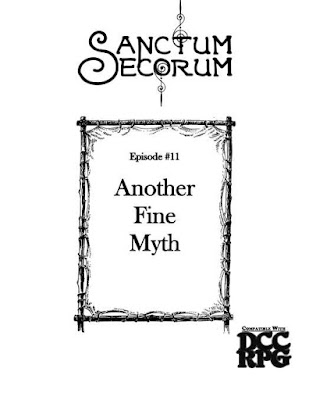 The Sanctum Secorum Episode #11 Companion: Another Fine Myth was written by Jen Brinkman, David Baity, and Bob Brinkman. Art is by Aaron Lin, Elise Martinson, Jannis Pinzone, Michael Richards, and Tim S. Holm. The publisher is Sanctum Media. This product is produced in association with the Sanctum Secorum podcast.

This Episode Companion is based on Sanctum Secorum Episode 11: Another Fine Myth, which discussed the novel by Robert Lynn Asprin. The featured adventure was The Making of the Ghost Ring by Michael Curtis.

Legerdemainist: "There are also those who realize very quickly that even a basic spell can be used in less than honorable ways. You are one such vagabond!" David Baity provides a class that is somewhere between a wizard and a thief.

The Bazaar on Deva: "Home to possibly the most mercenary of races in the known dimensions, the Bazaar on Deva is where one can go to purchase anything that they may desire, plus at least five to six other items that they didn’t know they desired but now could never see themselves living without. Consider this marketplace the Ikea bargain bin of the dimensions." Write-up by Bob Brinkman.

Crystal of Clarity: A useful item, written by Jen Brinkman, which can reveal the true nature of any beings seen through it.

Quigley’s Ever-Seeing Charm of True Sight: A charm used by one of the "more legendary demon hunters to rise to fame throughout the known realm", this charm is similar to the crystal of clarity, but it has its drawbacks. Write-up by David Baity.

Quigley’s Never-Dulling Sword of Truth: "Quigley was known for a number of magical items that he used in combating the forces of darkness and driving demons back into the netherworld. The most curious is his never-dulling sword of truth. He is only known to have carried the sword for a short time and it is said that its properties only reveal themselves when wielded by the truly pure of heart." Write-up by Bob Brinkman.

Con Crud: "This horrid creature, demonic in appearance, roams the world in search of gatherings of friends and companions, seeking to be their undoing. In its natural state the creature has silvery skin that flows like quicksilver and burning red eyes."

By this time, the hosts of Sanctum Secorum have already written ten free Episode Companions, mostly by themselves, as well as producing a podcast. It was April Fool's Day when this episode released. The introduction of material that didn't pertain to the subject novel, story, or movie was inevitable. Bob Brinkman provided the first example thereof, but there are many more to come in future Episode Companions.

Dragon of Deva, Immature: Jen Brinkman provides statistics an information for the immature dragons (such as Gleep in Another Fine Myth) that can be found in the Bazaar on Deva. I always pictured Growf the Dragon from What's New?? With Phil and Dixie! It should surprise no one that Phil Foglio did a graphic adaptation of the series.

Spider-Bear: "The ferocious creature known as the spider-bear has been terrorizing small communities for decades. Little is known of the creature’s origin, but legend has it the beast was created by a demented wizard set upon creating a better guardian for his arcane trove of wondrous items. The wizard crossed a dire bear with a captured giant spider, creating a beast so hideous that just one glance has been known to stop a heart! Two of the creatures were created and mated before the wizard was slain by his “cubs” after underestimating their abilities. The creatures escaped into the darkest parts of a nearby forest, and have been preying on locals while propagating their species." Write-up by David Baity.