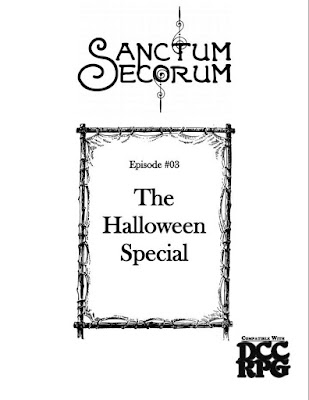 The Sanctum Secorum Episode #03 Companion: The Halloween Special was written by Jen Brinkman, David Baity, Bob Brinkman, and Stephen Newton (note that he is listed in the credits at the time of this writing as Stephen Bishop). Art is by Harry Clarke, ArcaneXIII3, hassified, and Tazzco. The publisher is Sanctum Media. This product is produced in association with the Sanctum Secorum podcast.

This Episode Companion is based on Sanctum Secorum Episode 3: The Halloween Special, which discussed a pair of tales by Edgar Allen Poe (The Cask of Amantillado and Masque of the Red Death). The featured adventure was They Served Brandolyn Red, by Stephen Newton. Stephen Newton also was guest host.

The Masque: Author David Baity offers the opportunity to play a member of "a dedicated group intent on keeping the balance of life in check, acting as a dark emissary of the god of plague and disease. Masques are masters of things most peasants flee from. Sickness, disease, and plague are the meat and drink of a servant of the Red Death."

They have a class ability called Plague Mongering. Enjoy!

Monstresor Crypt: Author Jen Brinkman provides a write-up for a family crypt where you might stay a while. Her version of the Monstresor family crypt diverges from Poe's, but, then, there is magic in Dungeon Crawl Classics to take into account!

Ebony Clock: Speaking of magic, Stephen Newton provides a grandfather clock which you probably do not wish to be around when it chimes the hour. This is even more true if the hour is midnight and there is a blood moon.

Prince Prospero’s Candles: Author Jen Brinkman provides candles that may be hard to light, but offer some real benefits to those willing to risk doing so.

Plague Reaper: "The plague demon appears as a tall gaunt death shroud, dabbed with splotches of both dried and f[r]esh blood. Atop the cloak is a hairless head covered with the desiccated skin of a withered corpse with blossoming red pustules commonly found on those infected with the red death disease. Those attempting melee with the plague reaper will realize it has no body." By Stephen Newton.

Plague Specter: "On occasion, overzealous followers of the Red Death find themselves transformed into a twisted mockery of life. Their humanoid form is replaced by a skeletal-crimson mist. These mists normally inhabit the Land of the Flies, native plane to the Red Death, but there are exceptions. The specters are sometimes sent to defend the faithful, or form spontaneously where plague has gone unchecked in heavily populated areas. The plague specters exist only to infect." By David Baity.

Bob Brinkman provides a partial patron write-up for a whole series of potential Deaths. Only the invoke patron results and general background are included.

The Red Death: Finally, David Baity offers a partial patron write-up for a mysterious and macabre being who "keeps watch over the domain of man, every vigilant for disease and plague that begins to out run the comprehension of man, during which a cure will be gifted to man by way of dream."

As with the Episode 01 and Episode 02 Companions, this volume can help the discerning Dungeon Crawl Classics judge determine how to stat up creatures from whatever movie or literature he likes.