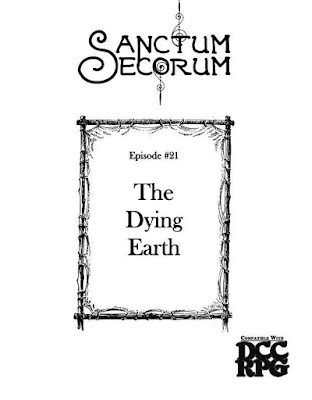 This Episode Companion is based on Sanctum Secorum Episode 21: The Dying Earth, which discussed the short story collection by Jack Vance. The featured adventure was Black Sun Death-Crawl by James MacGeorge.

Disclosure: Two adventures I wrote, Prince Charming, Reanimator, and Silent Nightfall, were discussed in this episode. In addition, I was a Contest Winner, receiving a set of the original Shanarra trilogy (The Sword of Shanarra, The Elfstones of Shanarra, and The Wishsong of Shanarra).

It is interesting to note that Goodman Games has announced a licensing deal to create a Dungeon Crawl Classics version of The Dying Earth setting.

Vancian Word List: Jack Vance's use of esoteric vocabulary is legendary. Here, Marc Bruner offers a mini-game based off the same:

"When the players encounter a series of runes or a magical grimoire that they attempt to read or decipher, have the players draw 3d3 words from the container and give them 2 rounds (20 seconds) to assemble a sentence using the words. The players can use common articles such as 'a' or 'the' to connect the words, but have to use all of the words drawn or risk an incomplete - and possibly disastrous - effect."

Jungle Warrior Mighty Deed: Vinery: Related to the Sanctum Secorum Episode #20 Companion: Tarzan of the Apes, Forrest Aguirre provides a Mighty Deed where swinging on vines is used to get advantage over foes.

Bearboon (I): A bear-sized hybrid, by Bob Brinkman (from a concept by Ethan Nicolle). This creature is not from The Dying Earth.

Bearboon (II): Also by Bob Brinkman (and also from concept by Ethan Nicolle), this is a smaller (but no less dangerous) hybrid. Also not from The Dying Earth.

Devourer of Beauty: "While some believe that beauty fades with time, or with the dying of love, there is a third cause – a more malevolent cause. The devourer of beauty is the foul spirit of a suicide that has been transformed by self-loathing into a creature determined to make the world over in their own self image." Written by Bob Brinkman.

Twk-Man: Intelligent insect-sized humanoids who bargain information for salt, they ride dragonflies and have greenish skin. Write-up by Bob Brinkman.

The Curator: "The Curator is an ancient being of profound wisdom. Once kept alive through artificial means, the vast knowledge accumulated within his prolonged lifetime refused to pass on with his mortal self."

This is a full patron write-up by Bob Brinkman. The Curator has knowledge of all 666 wizard spells, and all spells granted by patrons and deities. As a result, the Curator has no patron spells of his own, but can choose to grant any spell - wizard or cleric - as a patron spell, at the judge's discretion.

Pandelume: "Pandelume is a vastly powerful magician who lives in Embelyon, a land of his creation both of and not of the Earth. He is a master mathematician, the first since Phandaal, and knows all spells that were ever wrenched and molded from space. By his own law, no one may gaze upon Pandelume, and he always keeps his face and form hidden - to see Pandelume is to go mad."

This is a full patron write-up by Marc Bruner. Rather than have patron spells, Pandelume grants random cleric spells in their stead...but the spells are one level higher than the wizard spell whose "slot" they take.

Life Gong: This is a 3rd level wizard spell by Marc Bruner: "This lengthy ritual entraps the soul of a target creature to the will of the caster, binding it to a magical bronze gong that can be used to compel the target into acting in the caster’s service."

Marc Bruner supplies two methods of getting around in the world of The Dying Earth. Both are alive, and both are given a full statblock.

Live Boots: These "are a type of magical creature crafted by powerful wizards to enable effortless travel over long distances."

Oasts: A "giant race of men raised to be used as mounts by the uncivilized tribes living below the crags of Fer Aquila."

Lasso: Related to the Sanctum Secorum Episode #20 Companion: Tarzan of the Apes, Jonathan Nichol provides statistics for one of Tarzan's signature weapons.