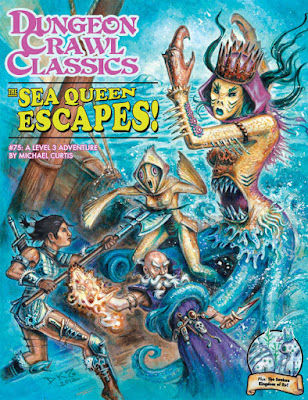 In The Sea Queen Escapes!, Michael Curtis offers an exceptional aquatic-themed adventure that allows you, among other things, to explore the passages within the shell of a giant sea turtle's back.

There some things that Michael Curtis does very well, and this adventure benefits from all of them.

First, the adventure requires that you visit three separate locations. This structure is used in adventures such as Intrigue at the Court of Chaos and The Making of the Ghost Ring. Several of his adventures have relatively linear structures, and this shifting from location to location is the spoonful of sugar that helps that medicine go down. He has a knack for drawing players naturally from one set piece to another, creating a tighter adventure without feeling like the players are being railroaded. Not all of his adventures follow this model, of course, but it is a model that he executes well.

Secondly, the adventure has the potential to change the characters' abilities for part of it, which layers in another thing for the players to juggle. In The Sea Queen Escapes!, although this is nominally accomplished through a curse, it is similar in effect to adventures like Emirikol Was Framed and The Old God's Return. This is just fun, and, again, the author does it well.

Finally, Michael Curtis does an excellent job establishing theme and setting. This will surprise no one who has run The Chained Coffin or examined any of the materials related to the upcoming (at the time of this writing) DCC Lankhmar boxed set. The very successful fourth printing kickstarter for the core rulebook allowed him to expand the material with a mini-setting of the sunken lands of Ru, similar to the Forlorn North expansion in Frozen in Time.

Apart from those things, PCs have good reason to fear the water. Even when they can swim, they tend to be dragged down by heavy armor or carried treasures that they simply do not wish to part with. The sea offers the most alien creatures on our planet, and oceans in a fantasy world only accentuate this. Drowning does not care how many hit points you have left.

For those who are interested, the original pitch for The Sea Queen Escapes! is presented in Scrivener of Strange Wor(l)ds. As another side note, when I converted Harley Stroh's Tower of the Black Pearl to Dungeon Crawl Classics, I was asked to make sure that the swimming and drowning rules therein meshed with those of The Sea Queen Escapes!. This adventure really does supply a grounding for all aquatic DCC adventures to follow!

Evil lurks beneath the ocean! For years it has slumbered, but now it rises once again, threatening to wash over the surface world like a monstrous wave. Only a handful of stalwarts stand between the nefarious schemes of the deep and a world drowned in sorrows, but first they must navigate a wizard’s sanctum, a magical prison, and the most unusual dungeon they’ve ever faced! Can they stem the tide in time or will they lose themselves forever to the Sea Change curse?