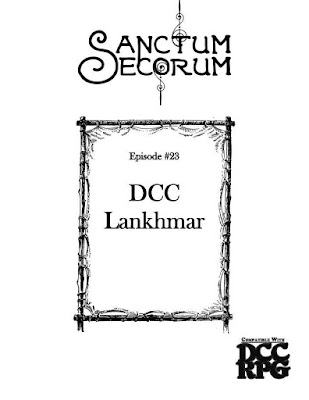 This Episode Companion is based on Sanctum Secorum Episode 23: DCC Lankhmar, which discussed the Fafhrd and Gray Mouser tales of Fritz Leiber and the upcoming release of DCC Lankhmar by Goodman Games (author Michael Curtis and others). The featured adventure was Masks of Lankhmar by Michael Curtis.

Disclosure: I have an additional writing credit in the kickstarter, and I wrote one of the stretch goal modules, DCC Lankhmar #2: The Fence's Fortuitous Folly.

Lankhmar Neighborhood: Part of the core concept of DCC Lankhmar is that the characters begin with a local neighborhood. This neighborhood can then be explored by the PCs, offering not only a place to adventure, but a place that the characters can know and make connections to. This is a pretty good idea for city-based adventuring, and Bob Brinkman (with the input Erik Tenkar) has gone to the effort of creating a complete sample neighborhood in this Episode Guide.

As an aside, it should be noted that, even if the aspiring judge is not aspiring to play in DCC Lankhmar, both the concept and the example neighborhood presented herein should prove useful.

Some locations (for instance, Tenkar’s Tavern), seem to be nods to people within the DCC and/or OSR community.

The Stains: This is an eight-member gang of "young toughs and bravos", which could be used either as foils or allies of the PCs.

"Known throughout their neighborhood, both individually and as a group, this collective of characters is often simply referred to as “the Five” (at least in polite company). Having originally come together during a heist at the grand masquerade of the caravan master Igrik (see Masks of Lankhmar), they have built up a reputation as true hard cases. Rumor is that they have been involved in foiling assassination attempts during high-society parties, have worked for the Overlord, and have forced the Thieves’ Guild to reconsider having placed contracts out on their lives."

Although Bob Brinkman is the only author credited, each of the Five is credited with a different creator. This suggests that the Five were PCs created for a DCC Lankhmar playtest campaign.

Arwin Lost: "Emerging from the Cold Wastes, the wizard Arwin brought his brother to Lankhmar in hopes of caring for him. Arwin’s distinct appearance (covered in purple tattoos), tendency to work magic while naked, and run-ins with followers of Issek of the Jug have made him a prime target of the law in Lankhmar." Created by Bill Porter.

Buyantu: "Hailing from the Mingol steppes, Buyantu fled to Lankhmar to avoid the doom that came to his mentor. Working as a freelance thief, he is quick to silence a foe, striking from the darkness of an alleyway with his bow, Heartseeker, or with a dagger to the kidneys." Created by Kirk Kirkpatrick.

Dudley: "A warrior from the Land of the Eight Cities, as rash as he is ruthless, Dudley is fond of using his twin war hammers, Squish and Splat, in combat (and if one is doing poorly, he is known to punish it by leaving it out of the battle). Dudley is often found carousing with members of a local gang, the Stains." Created by Jim DelVasto.

Lifthrasir the Gray: "A warrior skald from the Cold Wastes, Lifthrasir submitted to wanderlust and found herself journeying to Lankhmar. Armed with her massive sword, Pericles, and her daggers, Justice and Servant, she is known for her signature “trip attack” that often leaves men cleaved in twain from groin to jaw." Created by Jen Brinkman.

Oliver: "Hailing from the Land of the Eight Cities, Oliver is a caravan guard who has struck up on his own. He prefers to use his Mingol bow, Redemption, at a distance before closing into combat. He is often found out and about in the neighborhood, avoiding his wife." Created by William Ferry.