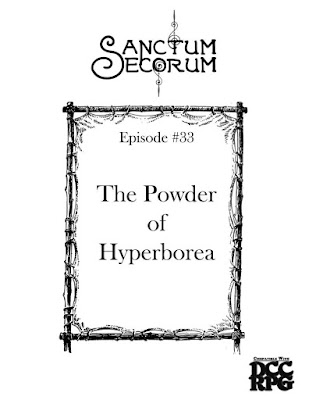 This Episode Companion is based on Sanctum Secorum Episode 33: The Powder of Hyperborea, which discussed the short story by Clark Ashton Smith. The featured adventure was Street Kids of Ur-Hadad by Edgar Johnson.

The Huntsman: “You are the rarest of occupations, that which stalks the night, seeking to destroy those creatures that hunt your fellow humans. You are a champion of the community, though greatly feared by the populace, as many Huntsmen fall under the sway of powerful monsters and ravage the countryside.” This is the February Contest First Place winner, created by R.S. Tilton.

Author Bob Brinkman brings you two of the deities associated with Hyperborea.

Leniqua: "Among the lesser gods of Hyperborea, perhaps none is so favored by the wealthy as Leniqua, god of the moon. Within his ancient temple in the suburbs of Hyperborea’s capital, Uzuldaroum, are kept thirty-nine maidens. The virtue of those maidens is guarded by the temple guards, as well as golden and jeweled chastity girdles."

Tsathoggua: "An alien god from a time when humans had yet to crawl from the primordial ooze, the cult of Tsathoggua is shrouded in mystery." Statistics for formless spawn (servitors of Tsathoggua) are also provided. See also The Weird Worm-Ways of Saturn and The Vault of Ash.

The Powder of Hyperborea: Jen Brinkman provides game mechanics for the titular substance of this story.

Alchemist: Information on, and statistics for, alchemists are provided by Marc Bruner.

Bob Brinkman provides statistics for two characters in The Power of Hyperborea. The author uses the Jobe Bittman method from The 998th Conclave of Wizards. They are:

Marquanos: "High priest of Leniqua and religious whoremonger, Marquanos personally holds the keys to the thirty-nine girdles. Repugnant in word and deed, this priest only cares for the lascivious delights offered to him by his position within the temple."

Veezi Phenquor: "Wizard-Alchemist and secret member of the Hyperborean Cabal (see Sanctum Secorum #8), Veezi spends his time during his recent retirement in the research of ever greater potions and unguents."

The Sanctum Secorum Episode #08 Companion: Life of Eibon, containing information on the wizards of the Hyperborean Cabal, can be found here.

Nightmare Nimbus: "The caster summons forth swirling hallucinatory clouds of nightmare to disorient and terrify his foes. Contact with the vapors is enough to trigger the spell effect, although inhaling them enhances the result." This is a 2nd level wizard spell, by Bob Brinkman.