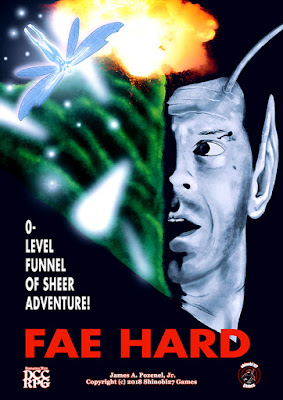 Disclosure: I backed the successful kickstarter that this was a stretch goal for.

This adventure is inspired by, and an homage to, the 1988 film, Die Hard. Knowing something about the movie will make the adventure more enjoyable, but I am happy to say that, while the adventure uses themes and situations from Die Hard, it doesn't attempt to reproduce the movie itself. Instead, it gives you a funnel adventure taking place inside a faerie mound. As a stretch goal for Angels, Daemons, & Beings Between Volume 2: Elfland Edition, the adventure not only (appropriately) deals with fay creatures, but deals with patrons. Two patrons are reproduced from the Elfland Edition volume.

Long enslaved in a faerie mound for past dealings with the local fey, you wake to the slaughter of your jailers. Is this your chance to escape? Will you rescue your overlords? It's time to FAE HARD!