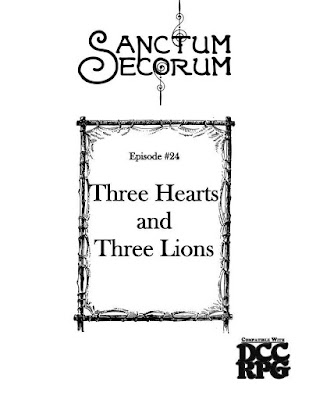 The Sanctum Secorum Episode #24 Companion: Three Hearts and Three Lions was written by Marc Bruner and Bob Brinkman. Art is by HvN2310, James Zapata, Joseph Holley, Raph Lomoton, Sandeep Karunakaran, and T.C. Dale. The publisher is Sanctum Media. This product is produced in association with the Sanctum Secorum podcast.

This Episode Companion is based on Sanctum Secorum Episode 24: Three Hearts and Three Lions, which discussed the novel by Poul Anderson. The featured adventure was Escape from the Shrouded Fen by Terry Olson.

Disclosure: An adventure I wrote, Creeping Beauties of the Wood, was discussed in this episode.

Wood Dwarf: "Woods dwarves are gnarled, short demi-humans that dwell in the forests on the edge of the Middle World and the  kingdoms of men. Wishing to having nothing to do with the wars between the two lands, they choose to bide their own lives and let Heaven, Hell, Earth, and the Middle World fight it out as they will."

This is a 5-level class, created by Marc Bruner.

Elf Hill: "Elf hills are sites of powerful faerie magic that beguile unknowing adventurers or lost travelers. Usually located within ancient woods or those forests most closely associated with tales of the fey, beings of the Middle World hold uncouth revels inside and emerge to dance on moonlit nights. In daylight, an elf hill appears as a prominent rise or mound, typically crowned with a timeless garland of beautiful flowers or roses, with streamers of mist covering its surface at both twilight and dawn."

Author Marc Bruner provides a description, with a 1d4 chart to determine how an elf hill might appear. For another take on an elf hill, see The Revelation of Mulmo.

Cortana: This is the magical blade wielded by Holger Carlsen – recovery of which leads him to discover his identity as Ogier the Dane. Write-up by Bob Brinkman.

The Dagger of Burning: Bob Brinkman provides statistics for the magnesium-infused blades of the elves. Another take on these appears in The Revelation of Mulmo.

May-Skein: This is the garment used by a maiden to turn into a bird. In addition to the swan-may (such as Alianora in the novel), author Marc Bruner supplies statistics for owl-mays and eagle-mays.

The following creatures were provided, courtesy of Bob Brinkman:

Hell Horse: An undying steed from Hell, who it is death to look upon.

Hollow Knight: An elvish construct, like an empty suit of armor. (Another take on this appears in The Revelation of Mulmo). Bob Brinkman also includes statistics for elfin steeds.

Faerie Mist: A 1st level fey patron spell by Marc Bruner. "With this spell, the caster is able to summon a fey mist to confuse their enemies, or even fill entire expanses to entrap those within in its seemingly unending extent." The spell is not linked to a specific patron, but could be taught by any fey patron - a rather interesting idea!