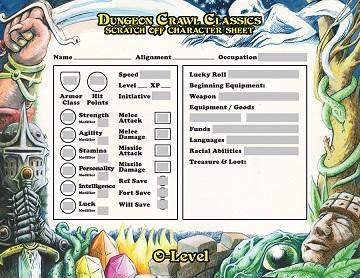 Designed by Jim Wampler, with art by Stefan Poag and emergent characters alternate rules by Marc Bruner, these sheets use a zero-level character data set created by Jon Marr. The publisher is Goodman Games.

The idea for these appears to have been the DCC 2016 Holiday Module: Twilight of the Solstice, by Marc Bruner.

While I have access to this adventure, I have yet to run it or use the sheets provided. I have heard one complaint that the sheets are difficult to scratch off, but otherwise I haven't heard any complaints. The pdf version of Twilight of the Solstice (which you can get here) comes with a Random Scratch-Off Character Generator pdf, which can be used to generate a limited number of randomized characters. The data set created by Jon Marr is, I believe, considerably larger.

The zero-level character creation funnel is one of the most popular aspects of DCC RPG play. Now we are thrilled to present an even more exciting improvement on that gaming experience! Instead of rolling up 15 0-levels before the game, you can now save time by using these scratch-off character sheets! Yes, scratch-off, just like the lotto. Each character sheet comes with a scratch-off box for each ability score and other key statistic. Before the game you distribute them to your players. They use a coin to scratch off the appropriate boxes, then you let the dungeon diving begin!

Each pack comes with 15 randomized scratch-off characters sheets and a set of alternative rules to implement them!