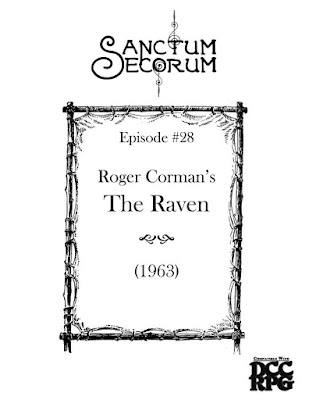 This Episode Companion is based on Sanctum Secorum Episode 28: The Raven (1963), which discussed the film by Roger Corman. The featured adventure was Enter the Dagon by Harley Stroh.

Disclosure: An adventure I wrote, Thirteen Brides of Blood, was discussed in this episode.

Barbarian: This class, by Ari-Matti Piippo, is another example of the iconic barbarian. Other barbarian classes can be found in the Sanctum Secorum Episode #12 Companion: Kothar: Barbarian Swordsman (itself reprinted from The Gong Farmer's Almanac 2016 Vol 1), D.A.M.N. #1 - DCC RPG Adventure Magazine and News, and the Sanctum Secorum Episode #14 Companion: The Jewels of Gwahlur.

The Blood-Drinking Box, Part 4: Clifford Morton continues the tale started in Sanctum Secorum Episode #25 Companion: The Fallible Fiend. This is based of off Terry Olson's Elzemon and the Blood Drinking Box.

Way of the Raven: "Through careful study and ritual, casters – particularly those of a shamanistic or naturalistic nature – can attempt to bond with a specific species of animal, enabling them to draw upon that animal’s strengths." The Way of the Raven is a specific example, detailed by Marc Bruner, as a full patron write-up.

The author notes that "These rules are an adaptation of the rules for Ways found in Dinosaur Crawl Classics. For more information on Ways, including Ways of the Tyrannosaurus, Triceratops, and Pteranodon, see the Goodman Games Gen Con 2017 Program Guide." The listing for this program guide can be found here.

Bedlo’s Promethean Sphere: "The caster draws upon the primal phlogiston to provide a spark capable of creating life or bringing death." This is a 4th level wizard spell.

Deceptive Dissolution: "A favorite among spell duelists, deceptive dissolution uses the strength of an attacker's spell – and their faith in its power – against them. The caster is, by all visible accounts, slain by the incoming spell, while he instead is teleported to safety and his body is replaced with a magical simulacrum." This is a 3rd level wizard spell.

Devouring Void: "The wizard rends open the ground beneath the feet of his foes, sending them tumbling into the yawning darkness beneath." This is a 5th level wizard spell.

Diabolic Dominion: "Harnessing the blackest of infernal powers, the wizard subjugates another to their will, forcing them do to their bidding and enslaving their very souls." This is a 2nd level wizard spell.

Phlogistonic Spray: "Grasping at the raw forces of magic that surrounds her, the caster lashes out with a wave of raw, unfocused magical energy that affects a single target." This is a 4th level wizard spell.

Technical Affinity: "Some wizards make up for a lack of proficiency in their abilities with magic by enhancing their craft through the use of various arcane aids and tools. They may be alchemists who mix strange ingredients with mystic reagents or thaumaturges with a wide array of sympathetic items. They may be astrologers who rely on the ebb and flow of cosmic tides or artificers who construct reality bending tools to elevate their craft. These wizards go beyond their personal limitations by relying as much on their tools as their own energies." This is a 2nd level wizard spell, akin to Arcane Affinity in the core rulebook.

Wand Magic: "Favored by artificers, but relied upon by many, with this spell, the wizard crafts a wand and imbues it with magical energies linked to his soul." This is a 2nd level wizard spell. For other variations on this theme, see Crawl! fanzine #3 and Liber Arcanum.

Finally, Bob Brinkman uses the Jobe Bittman method from The 998th Conclave of Wizards to provide statistics for three wizards in Roger Corman's The Raven. They are:

Dr. Adolphus Bedlo: "Dr. Bedlo is both hampered and helped by his reliance on occult apparatus. While it allows him access to spells normally beyond his reach, it has not given him any greater abilities beyond his own, humble, natural talents. Looking out only for himself, Bedlo will seek to curry favor from whoever seems most powerful." Dr. Bedlo was played by Peter Lorre.

Dr. Erasmus Craven: "The son of the powerful magician Roderick Craven, former Grandmaster of the Brotherhood of Magicians and Sorcerers, Dr. Craven is a gentleman’s wizard. Kind of disposition, and loath to show off his talents, he merely wishes to practice his craft in private. Dr. Craven is a vegetarian." Dr. Craven was played by Vincent Price.

Dr. Scarabus: "Grandmaster of the Brotherhood of Magicians and Sorcerers, Dr. Scarabus is a longtime rival and enemy of the Craven family. While outwardly he seems almost grandfatherly, his unbridled lust for power leads him to weave Machiavellian machinations against those whose power he envies." Dr. Scarabus was played by Boris Karloff.