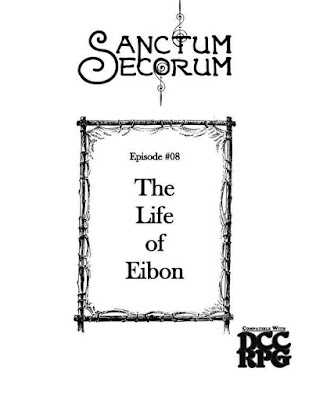 This Episode Companion is based on Sanctum Secorum Episode 8: The Life of Eibon, which discussed the The Life of Eibon According to Cyron of Varaad by Lin Carter (and others). The featured adventure was The 998th Conclave of Wizards by Jobe Bittman.

Disclosure: I was a member of the DCC Cabal who wrote Death by Nexus and The Hypercube of Myt, both of which were discussed in this episode.

The Book of Eibon: This is actually a series of volumes, whose properties are described by Bob Brinkman.

The Grimoire of Eibon: Bob Brinkman provides game statistics for the powerful spellbook of the notorious wizard Eibon, son of Milaab.

The Ring of Eibon: Statted up by Bob Brinkman.

Talisman Generator: Using 1d20 for material, 1d12 for form, 1d6 for trimming, and 1d12 for odd quality, David Baity provides a generator which can create a myriad of magical trinkets and amulets. The basic function of the talisman is not generated by this system, which serves only to make each amulet unique.

These beings are described using Jobe Bittman's method in The 998th Conclave of Wizards. They are:

Alabbac of Mnardis: "Apprentice to Cyron of Varaad, Alabbac was the wizard sage who completed the work if his master, finishing the Life of Eibon." Written by Bob Brinkman.

Cyron of Varaad: "The apprentice and biographer of Eibon, son of Milaab. After Eibon left the primary plane of existence to walk the worlds, Cyron dedicated his life to uncovering how it had been done." Written by Bob Brinkman.

Eibon, son of Milaab: "Clad in tattered robes of grey, and with his unkempt hair and beard, Eibon presents a slightly sinister air. One of the greatest of all Hyperborean magicians, his powers are believed to be near limitless." Written by Bob Brinkman.

Harood of Kalnoora: "Apprentice of Alabbac and last of the line of Hormagor’s tutelage. Greedy for knowledge, Harood sought to plumb the mysteries of the Book of Eibon only to have it crumble away in his fingers, cursing him and forever barring him from greater magics." Written by Bob Brinkman.

Hormagor, the wizard of Abormis: "Master to Zylac and last of the aboriginal magicians of Epigonian era, and second only to his grand-apprentice in might. Hormagor took an active role in adventuring and seeking out knowledge in far off places and strange lands." Written by Bob Brinkman.

Morghi the Inquisitor: "Wizard-Hierophant and grand inquisitor of the elk goddess Yhoundeh, and sworn enemy of Eibon." Written by Bob Brinkman.

Wampl’rji the Pyromancer: "Even in fabled Hyperborea the exploits of Wampl’rji the pyromancer were legend. His mastery of flames (as well as his love for a dark and bitter tasting brew) was well known amongst the magicians of the epoch." Written by Bob Brinkman. Yes, that is a photo of the notorious Jim Wampler.

Zylac the Enchanter: "The foremost of the disciples of Hormagor and master to Eibon, Zylac is a bedraggled wanderer, much like his master (although far less well-kempt)." Written by Bob Brinkman.