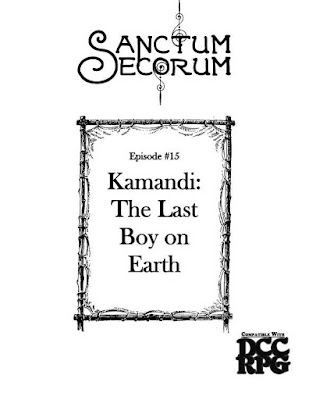 This Episode Companion is based on Sanctum Secorum Episode 15: Kamandi: The Last Boy on Earth, which discussed the comic book series by the immortal Jack Kirby (and others). The featured product was Mutant Crawl Classics by Jim Wampler.

Canine Scientist: "Using their superior intellect, many canids have found themselves high ranking positions as advisors to warlords of the other species (most notably Doctor Canus, who serves Caesar, the warlord of the Tigers)."

This class, written by Bob Brinkman, allows you to play such a creature. It is interesting to note that, because the Mutant Crawl Classics rules were not available at the time this Episode Companion was written, this class would probably work better in an Umerican or Crawljammer campaign. Drongo: Ruins of the Witch Kingdoms includes a Simian class which is clearly inspired by the Planet of the Apes series of films, as was Kamandi. Primal Tales #1 allows you to build communities of anthropomorphic animals which would be right at home in Kamandi's Earth A.D.

Human, Earth A.D.: "When the great disaster struck earth, mankind fell into barbarism. Unable to cope without the benefit of their technologies, humanity rapidly devolved into a primitive state. Mostly dwelling in caves and ruins, these last vestiges of humanity fight not for glory, but for their own survival. Characters of this race are often taken on as pets and will loyally serve with their friends."

Now you can play one, courtesy of Bob Brinkman.

The Hybrid: David Baity provides not just a class, but a simple method for playing a humanoid hippo, lion, or even mosquito. Again, it is interesting to compare this build with those from Primal Tales #1. It seems likely that the authors of Primal Tales were building off David Baity's foundations.

Nu-Men: "Altered by ancient, lost science to survive the greatest environmental threats that mankind might ever face, the nu-men are spoken of in whispers, and rarely, if ever, encountered. At first glance they can pass for human, although their civilized behavior and ability to speak immediately sets them apart from all other humans of Earth A.D."

The radioactive men of Kamandi's future are described as a class by Bob Brinkman.

Author Bob Brinkman provides two creatures one might encounter in the Earth A.D. of Kamandi: The Last Boy on Earth.

Beast of Monster Lake: This is a giant radioactive crab-thing which can generate waves of destructive energy from its eyes.

Zone Devil: "Of all of the horrors spawned by radiation, the giant insectile creatures often referred to as devils are certainly out of the collective nightmares of humanity."

Note that this is also explicitly true in Mutant Crawl Classics.

The Star Child: "Somewhere across the infinite realms of time, space, and possibility, there stands the greatest possible achievement of architectural design: a monolithic solid whose perfect and precise dimensions exist in a ratio utterly pleasing to the cosmos itself. Not only are the monolith’s height, width, and depth in perfect harmony with the divine ratio, but so too are its invisible dimensions, on into infinity across the breadth of time, substance, and all meaning. To behold this wonder is to behold the splendor of creation. To touch it is to touch the very fabric of perfection."

This is a partial patron write-up by Andrew Branstad. It includes invoke patron results as well as patron taint. This appears to be based on 2001: A Space Odyssey, rather than the Kamandi series, but there may be some crossover that I am not aware of. Note that this is not a patron AI, although one did appear in an earlier Episode Companion.