The Data Orb of Metakind 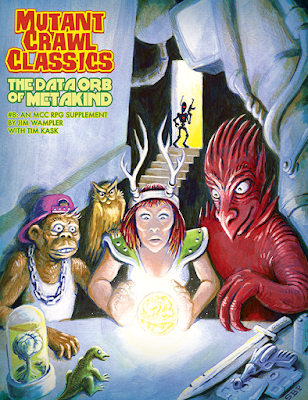 In a way, Quest For It may be even more important to Mutant Crawl Classics Pure Strain Human PCs than it is to Dungeon Crawl Classics PCs - but then, there are far more game-altering artifacts in the average Mutant Crawl Classics campaign to quest for. Strange items that might kill you, or might elevate you above the common lot of your kind, are as important to adventure design as are strange mutated creatures that probably want to kill you. Again, this product is a strong example of the kind of game-altering artifact the PCs might attempt to recover.

For the first time, an entire 24-page supplement devoted to a single artifact of the Ancient Ones!

The most holy of ancient relics, The Data Orb of Metakind has been passed down between tribal shamans and mystic mutants from generation to generation for thousands of years. If you can successfully bond with the golden orb’s AI, tetrabytes of arcane technological data can be yours, if you but survive its use.

For while knowledge is power, it comes at a price.
Posted by ravencrowking at 17:43