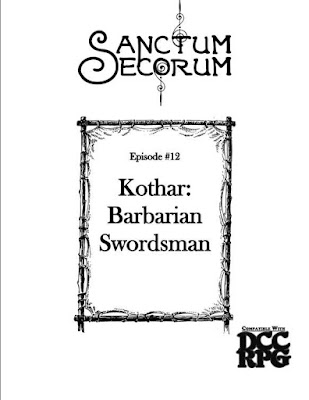 This Episode Companion is based on Sanctum Secorum Episode 12: Kothar: Barbarian Swordsman, which discussed the novel by Gardner F. Fox. The featured adventure was The Emerald Enchanter by Joseph Goodman.

Barbarian #1: This character class, written by Diogo Nogueira, appears to be the same as submitted to The Gong Farmer's Almanac 2016 Vol 1. I noted only minor formatting differences.

Barbarian: This is another Barbarian class, this time by David Baity.

Bob Brinkman provided game information for various deities and powers of Kothar's world. These are not only given alignments, as occurs in Dungeon Crawl Classics, but are given domains and favored weapons, as in 3rd Edition Dungeons & Dragons. These may help aspiring DCC judges to better depict these beings in their campaign milieus.

Astrol: "Astrol is a powerful being from the abyss, known for his defense and protection of other creatures that serve dark powers."

Elwys the Golden: "Elwys of the golden breasts is depicted as a beautiful woman with flawless, honey-colored, skin and lustrous blonde hair."

Azdorian Spider: "The Azdorian spider is a fearsome hybrid of a giant spider crossed with that of an equally as large scorpion." By David Baity.

Ink Wraith: "The ink wraith usually finds itself in the service of some dark lord, or sorcerer, as its ability to channel dark energies into permanent painted marks, or tattoos, make it highly sought after." By David Baity.

Lich: The Dungeons & Dragons lich was probably inspired by Kothar: Barbarian Swordsman, and Bob Brinkman puts the original depiction into Dungeon Crawl Classics game statistics. Specific statistics for Afgorkon, who acts as a sort of patron to Kothar, are also given.

Phlogiston Storm: "Through the machinations of this spell, the wizard may initiate a spell duel with any caster known to them, wherever they may be. Space and time warp, forming a channel betwixt the two, allowing for direct line of sight between the casters and negating any spell range restrictions other than touch." This is a 5th level wizard spell, penned by Bob Brinkman.

Wizard Cage: "This spell will temporarily imprison casters and render their magic powers/items inert. It was created with chaotic wizards in mind—specifically those who are too powerful to be killed. No magic used within the cage – spells or items – will prove effective." This is a 5th level wizard spell, penned by Jen Brinkman.