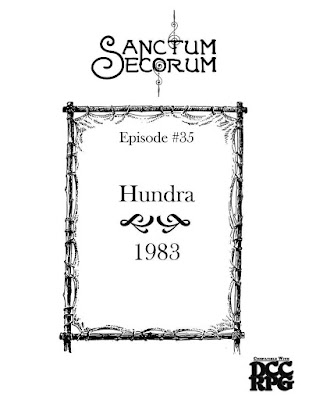 This Episode Companion is based on Sanctum Secorum Episode 35: Hundra (1983), which discussed the film by Matt Cimbar. The featured adventure was The Trolls of Mistwood by David W. Fisher.

Disclosure: I did some writing on this Episode Companion. In addition, an adventure I wrote (The Tribe of Ogg and the Gift of Suss), and an adventure I co-wrote (Curse of Mistwood, with David W. Fisher) were discussed. Finally, it was announced that I won the April Contest, meaning that the DCC Trove of Treasures will have a listing for Super Number One Food Tower!

Amazon: "Refusing to be subservient to men, the Amazons are tribes which consists solely of women. Nomadic, these warriors travel to avoid the conflicts which inevitably arise when they encounter male-dominated societies. Preferring to live in peace, these women are well trained in the arts of war and do not shy from combat, for none are their superior." Class by Bob Brinkman. This is the only thing in this Episode Companion which related directly to the featured film.

Bard: "The tradition for song and storytelling spans all cultures and times: bards, minstrels, skalds, wise-men, soothsayers, troubadours and shamans all spin the same magic of the Word, bringing new meanings and ideas to those who care to listen." Class by Ari-Matti Piippo.

For another take on the bard, see Crawl! fanzine #6.

Baal Zymymar: "This potent demon has power over a legion of seventy-two lesser demons. It appears as a giant (20' tall) goat-headed man with a patch of bare flesh shaped somewhat like an upside-down star on its forehead. Baal Zymymar gives off an offensive smell, not unlike that of a great goat, but muskier and strangely disturbing to those who smell it. The demon can communicate telepathically or speak in any known tongue." This entry, by Daniel J. Bishop, was originally from a blog post.

The Entourage of Baal Zymymar: Five demons (four specific demons and one type of demon) that are linked to Baal Zymymar. This entry, by Daniel J. Bishop, was originally from a blog post.

Bear Bat: A big bear with bat wings and a venomous bite, by Bob Brinkman.

Bear Crab: A crustacean crab that regenerates, by Bob Brinkman.

The Death Dealer: "The Death Dealer is an un-dead reaver mounted on a great black warhorse. His eyes glow red, but no visage can be seen beneath his horned helmet." This entry, by Daniel J. Bishop, was originally from a blog post. Includes statistics for the Death Dealer’s warhorse.

The Following Thing: "It looks like a well-dressed man in a long black suit with tails, but its face is a stag skull with dead white eyes. It does not walk, but crawls on all surfaces with equal ease. Once it selects a victim, it will pursue that victim relentlessly..." This entry, by Daniel J. Bishop, was originally from a blog post.

Lilith: Author Ian Shears describes the "mother of monsters, the queen of demons" with a full patron write-up. Several creatures related to Lilith are also described:

Hundra-Struck: According to the Episode Companion, this is "To the tune of AC/DC’s Thunderstruck with apologies to Angus & Malcolm Young and all blame to Daniel J. Bishop". Lyrics by Daniel J. Bishop.