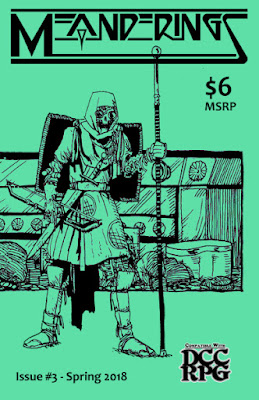 Meanderings #3 was written by R.S. Tilton and Jeff Scifert. Art is by Mario Torres (including cover) and R.S. Tilton. The publisher is Epic Meanderings.

Disclosure: I am a Patreon member. I am mentioned in "Credit where credit is due: The Source of the Inspiration.", which is part of the Introduction.

Meanderings is the house publication for R.S. Tilton's Bastion campaign milieu, although the articles it contains are generally universally applicable to diverse Dungeon Crawl Classics campaigns. Some issues contain material focused on other game systems that the authors are interested in, although this issue is firmly focused on DCC. There is no specific theme to this issue, except for the rather generic "options".

Review Corner: An overview of Mike Evans’ Hubris: A review of Hubris, starting with "This is one Hell of a book. It’s a great setting, as well as an amazing resource for any DCC Judge." and then going into details. Written by R.S. Tilton.

Tools of the Trade: What are Thieves’ Tools?: Author R.S. Tilton examines thieves' tools, giving a list of items both in a basic tool set (as listed in the core rulebook), an expanded thieves' tools set that can grant a bonus to some skill checks. An even better master set, as well as magical tools, are also described.

Bladed Weapon Styles: Cloak & Blade and Sword & Scabbard: Similar to Off the Charts! in Meanderings #2, this article by R.S. Tilton offers two new Mighty Deeds. It uses the Mighty Fumbles and Mighty Criticals option from Steel and Fury.

Reeling in Clerics: By the Gods! House rules for Clerics: If you are finding clerics a little overpowered in your home game, R.S. Tilton offers some house rules to reign them in. I am especially pleased with the "Individual Disapproval ratings" rule, which answers the question: "What happend when I keep healing an ally who is offensive to my god?" Rather than simply upping the cleric's Disapproval, the author makes it harder to target the offensive recipient.

In Defense of Luck: Using Luck defensively: House rules by R.S. Tilton to use Luck to adjust AC, reduce damage, or instantly succeed on a recovering the body check - whether rolled over or not! The author also suggests ways in which non-thief or halfling characters can recover Luck, which would promote using it more. Judges may wish to consider the Fleeting Luck rules in the upcoming DCC Lankhmar to give players more incentive to use Luck without allowing every class to regenerate it.

"Unlike a deed die, the effect die only generates a predetermined result; it does not automatically increase attack and damage results. Many times, the effect die result is simply additional damage, especially with the lower end results."

Classes of Bastion: The Graft - A warrior...enhanced: Authors R.S. Tilton and Jeff Scifert bring you an enhanced human warrior using bioarcana and technoarcana grafts to make himself both more than - less - than human.

"You are an enhanced human, a brutal sign of end-times, sacrificing your humanity for survivability, a mercenary who fights for the highest bidder. Whether using the crude bioarcana grafts or the more refined technoarcana ones, and unlike those with minor grafts, you are less than human, and yet so much more, part machine, part monster, one step away from a permanent trip to the Warpwastes. With each replacement, you risk your very essence and humanity."

Umbral Market - Bioarcana Grafts: Grafting Bio-organic parts: An article on bioarcana grafts. It is noted that the article is a placeholder, which the authors intend to revise after the release of Mutant Crawl Classics. R.S. Tilton and Jeff Scifert are the authors.

It should be noted that a review of Mutant Crawl Classics appears in Meanderings #2, so it is reasonable to assume that this revised version of the grafts article already exists (or partially exists).

Zeroes to Heroes: Paper minis for level 0s: Each issue of Meanderings to date has included a
loose insert on card stock of paper minis for zero-level games. This issue is no exception.